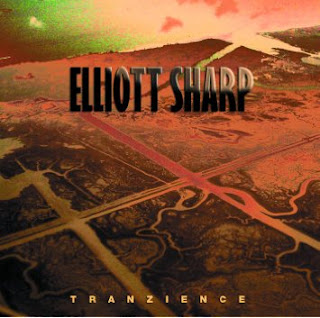 The artistic mastery of Elliott Sharp over his long career has taken primarily three shapes: as an innovative guitarist in blues rock (Terraplane) and avant jazz contexts, as a jazz composer-bandleader, and as a new music composer. Today's CD, Tranzience (New World Records 80778-2), concentrates on the latter, with four compositions that show Sharp's innate brilliance in realizing significant form in original and aurally captivating sound sculptures.

Each work was fashioned for a specific chamber configuration: "Tranzience" (2013) for the JACK String Quartet, "Approaching the Arches of Corti" (1997) for the New Thread Quartet of soprano saxophones, "Homage Leroy Jenkins" (2008) for clarinet, violin and piano, and "Venus & Jupiter" (2012) for the chamber ensemble Either/or with Elliott on electroacoustic guitar.

A great deal could be said of each work. The liners, written by Anthony Coleman following an interview with Sharp, touch on some salient aspects of the works presented. The "low throb" is one aspect--from its presence in bodily rhythms, to its transformations in the form of "dronalities" that morph and become multiple discrete pulses and/or a single organizing pulse to which everything relates.

Another aspect of his music relates to the dichotomies and oppositions between pulse and contrasting explosive disruptions and noise, a vividly bipolar set of tendencies that have played out between and against the Downtown Music minimalist composers and the Downtown avant improvisational artists. Sharp has tended to be associated with the latter artists yet his music includes both aesthetic polarities. The new music composition of his mature phase goes beyond improvisations per se but does not feel a one-to-one affinity with typical compositional trends either.

The influence of Fractal Geometry, the Fibonacci sequence and other mathematical perspectives inform his music but the decaying industrial dystopia and the idea of disruption play a balancing act in his music as a whole as well. Elaborate order and expressively intentional chaos join hands and are part of the same impetus, you might say.

All these considerations and more play themselves out in varying ways in the four compositions that make up the album. Neither the organizing principals nor their intentional disruption are the point of this music in the end, it goes without saying. It is the play of musical-intentional multiplicities that Elliott Sharp's musical inventions adhere to and overcome, and the sheer sonic beauty of the multiform expressed in personal terms ultimately holds sway with our committed listening beings.

And for that the performers and Elliott's varied compositional dialogues are in the end irresistibly melded into a music of aural significance that we enter into readily and willingly. That is to say that anyone who embraces the modern, advanced zeitgeist should find the music bracing and pleasureably stimulating, intelligent yet cathartic, articulate yet wholistically driven, brilliant yet refusing to stay put.

In other words, this is music of the modern now by a composer-artist of great importance to the now in which we live.