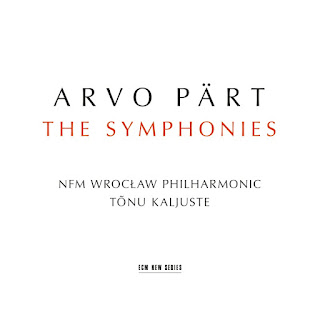 Nobody with an interest in the latest Modern Classical music can afford to ignore Arvo Part. And indeed why on earth would one want to, since his music has a sometimes stark grandeur, echoes of more ancient forms and a marvelously narrative demeanor that sets him completely apart among his peers? As time goes by we can more readily synthesize what he has done. A perfectly sensible and summed up offering out now is all four of his symphonic creations on a single CD entitled The Symphonies (ECM New Series 2600).

Conductor Tonu Kaljuste and the NFM Wroclaw Philharmonic give us beautifully alive, heartfelt but measured readings of the complete output. We feel celebratory as we hear all four new readings and compare the works side-by-side. As the sequence proceeds we do feel a movement forward from a sort of attachment to "New Music" presentation gradually into the timeless eerie world of a present haunted by the memories of the past that is so much Part's special way with listeners.

The conductor approaches the recording-performance as if it were one grand symphony and indeed listening we do feel a continuity and a movement more and more toward an iconically singular voice. Yet none of it sounds tentative in the least. Each phase is a confident and eloquent assertion with its own stylistic assumptions. The First in a neo-classical avant way, the Second an adept, very adventuresome collage, the Third with a turn to his special allusions to early music, the Fourth with a timeless spiritual meditation and some of his celebrated tintinnabuli form along with slowly unfolding sonic planes endlessly stretching forward. It is a sublime journey.

Anyone who loves Part will find it all indispensable. Those who do not know Part would do well to start here. It is one of those releases that marks out the year as special. Can I be more plain? It is wonderful.
Posted by Grego Applegate Edwards at 6:59 AM