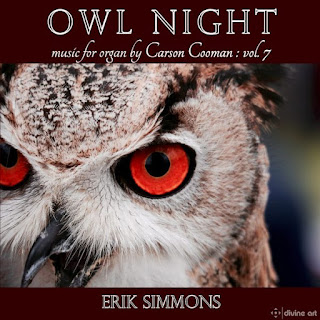 (By the way the Divine Arts Recording Group shortly will be releasing their 500th recording, which in this or any time is a remarkable achievement. Congrats to them!)

I have not heard anything from Cooman that was not well-crafted and engaging. Owl Night is that and a good deal more. It is orchestral-depth organ music in the grand tradition that characterised the French school from Franck to Messiaen. That is not to say that you readily hear an influence so much as it has a beautifully dynamic mysterium and big sweep, not unlike the most ambitious French School organ music that we who love organ music find so appealing.

The music on this volume was written in the second half of 2016 and the first half of 2017. It covers a good deal of ground. So "Two Mantras" manipulates repeating figures and variations on them as well. "Owl Night" is a moody, quiet reverie. "Concert Piccolo" uses a 12-tone row previously utilized by Eberhard Kraus in a work of the same name. The piece is in memoriam.

"Two Fantasias" utilizes the same musical materials for contrasting movements, one bittersweet atmospherics, the other triumphant and majestic. Finally five Preludio, a Postludium, and a "Toccata, Aria and Finale"  send us off with flair. Quietude and  extroverted majesty alternate for a most fitting conclusion.

There is a deeply organ-ic experience available in this volume. There is much to assimilate and richly so. It is not un-Modern, it is un-self consciously Cooman Modern. And it is a very good thing, that. I recommend this to anyone who loves the organ. And anyone who has not yet experienced Carson Cooman and seeks a living voice of distinction in New Music.  Good music. Very good. Worthy of your ears, certainly.

Posted by Grego Applegate Edwards at 7:13 AM