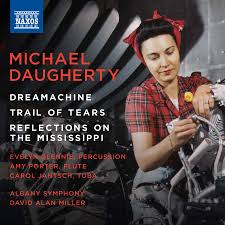 Orchestral works by Michael Daugherty seem effortless. That is he seems such a natural for orchestration and orchestral writing that the music gives off the illusion that it practically writes itself. Of course that cannot be true. There is enormous facility, a directly communicative narrative and a sort of hard-edged perfection that tends not to show the scumbling of hard work and revision upon revision.

We get the chance to experience some very vibrant Daugherty in this light on a new recording by the Albany Symphony under David Alan Miller. Three concerted works grace the program, each a world unto itself. The soloists for the works are near ideal exponents; the orchestra very well situated and fully rehearsed to give a precise, impassioned and nuanced reading of the music.

All of the works were written in this decade. Two of the three enjoy World Premiere recordings.

The program starts off quite evocatively with "Trail of Tears" (2010) for flute and chamber orchestra. It has some beautifully complicated, limber and agile flute parts that Amy Porter handles with aplomb. The government mandated, forced movement of Indian people in 1838 forms the thematic core of the music. It is understandably a serious work that ennobles the dignity and resolve of the victims.

"Dreamachine" is a somewhat quixotic work that pays tribute to the imagination of the inventor humanity and what they have given us. Percussion virtuoso Dame Evelyn Glennie is put through a demanding and rewarding set of multi-percussion challenges. The interaction of solo and orchestra is perhaps a kind of translation into sound of the mutually of inventor and invention as against the teaming social whole in which they flourish? Just a thought. It is mysterious and concretely palpable in very interesting ways.

Finally there is "Reflections on the Mississippi" (2013) for tuba and orchestra. It stands out for its melodically communicative character. The tuba part handled so well by Carol Jantsch is a kind of master narrator, telling of the land, the river and the long history of human-water-land interactions and the meditative essence of it all. The sections that move along like a living current excite. The more becalmed moments allow reflection. At least that is how I hear it. It is moving music.

After having listened closely to many Daugherty works, the impression of a grand synthesizer of music in our time rises. Does Daugherty have a special style? And if so how do we characterize it? The answer to the first question is yes, plainly. I always seem to be taken in immediately by the sheer visceral pleasure of each previously unheard work. I at once find myself aswim in the delightful sonic currents and must then stand back for a time in order to come to some meta-understanding and a commentary on it. He has his own way, surely, and it comes to us via a very thoroughgoing and hearty incorporation of what musical advances the last hundred or so years of seriously achieving local musics have given to us. There is something of that totality in most all his works. And in the process of assimilation there is a fundamental Daugherty quality to the result. His music is genuinely descriptive and outward pointed rather than forged out of inner necessity, so to speak. He perhaps is the opposite of a Bruckner or Messiaen. It is the world outside him that Daugherty takes on and shapes into his own personal images. And the Americana in his music is well integrated so that we sense it more that point to it.

This is important music excellently performed. I would not hesitate to point it out as highly representative of Daugherty at his best, and so essential listening for anyone who wants to swim with the current of some of the excellence of what is happening now. Highly recommended!

Posted by Grego Applegate Edwards at 8:08 AM