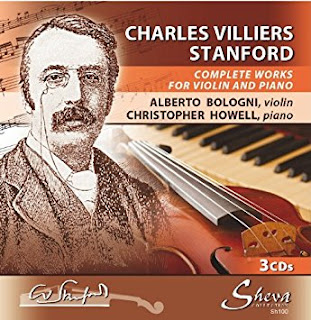 For many years, in fact up until recently, the only music I'd been able to hear of Charles Villiers Stanford (1854-1924) was a few scattered choral works. By a not especially detailed look at such music I thought of Stanford as maybe a little Elgar-like, slightly stodgy and Victorian? In fact when you listen closely to Elgar that view is not uniformly warranted, so also Stanford.

In Stanford's case I was disabused of the notion by a number of  new recordings--devoted to an in-depth view of his choral works and of his chamber output, lately especially of Christopher Howell's Three Volume, nine CD Complete Piano Music (See for example my Nov. 2, 2017 Blog Post.)

What I discovered in these new releases was the relatively untold story of a major figure in the English Modern Compositional Renaissance--not at all Modern in our accepted sense but neither all that Romantic. And not so stodgy, either.

That impression is born out by the welcome addition of a three-CD set of his Complete Works for Violin and Piano (Sheva Sh 100). Pianist Christopher Howell seems perfectly suited for the music, as he did for the solo piano works. His partner for this project is violinist Alberto Bologni, who acquits himself in a fine manner as well.

The music is nicely straightforward, tuneful, lyrical at times, never pretentious, not primarily virtuoso-oriented, a sort of English Chabrier in the focus on musicality. The folk and folk dance related pieces are the most charming but there too are some very nice moments of unvarnished song and instrumental singing. I imagine this might have made quite attractive salon music at the time.  Today it stands out as remarkably down-to-earth music, not exactly fragile and sometimes robust yet also un-mawkishly tender too. Some of the rhapsodistic music veers firmly into Romanticism yet it does so almost folkishly and not at all idiomatically.

In this way the music transcends era to be patently timeless. Yet it is very much of its time. In this music we can hear what for Stanford was a stance on being Anglo, on being an English composer that we now can see was in the air as a result. It helps explain and situate the very individual furtherance of a local style in the music of Vaughan Williams, Holst, Walton and the rest. Plus it is very enjoyable music in its own right. There are no great strides taken harmonically, nor are dissonances a factor, understandably. Yet too it is a definite break from any traces of Germanic Romanticism and a freeing up of the local to be itself.

So in the end I cannot but recommend this set to anyone who seeks to ground fully in the origins of the Modern English Renaissance. The works here are delightful in themselves. It is a freshening of your usual fare, no matter what that fare might be. So listen.

Posted by Grego Applegate Edwards at 7:10 AM