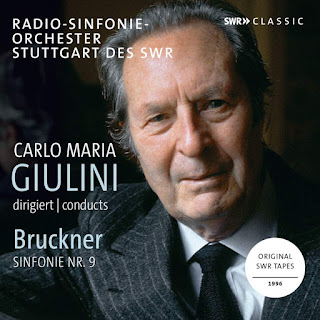 Anton Bruckner's music came out of himself almost in spite of his everyday personality. He was a devout Catholic, a soul so timid that when an orchestra was running through one of his symphonies and a player questioned what note he was supposed to play, Bruckner was said to have responded, "whatever you'd like." He probably never even kissed a woman, which back then could have meant anything except a boldness, surely. No doubt in our modern, more canderous parlance he never kissed a man, either. His music was in many ways the opposite of his personality, except perhaps his devoutness, which was key. The music is of course bold and assertive with a cosmic hugeness far beyond most of the music others created during his lifetime, or even afterwards. His was the music not about God, or from God, it was God. Only Mahler in a certain mood could rival him for his huge cosmoses of God-like sound.

That is so much the case that when I threw an "end-of-the-world" party as Three-Mile Island seemed to be cataclysmically melting down not far away from us, I immediately chose Bruckner's Symphony No. 9 as one of the soundtracks. The maelstrom of music that is the 9th seems truly like the Voice of God to me, as much as one might imagine such things.

Given my life-long appreciation of this work, I do not shy away from versions yet unheard. So today we have the "Original SWR Tapes, 1996" of Carlo Maria Giulini conducting the 9th with the Radio-Sinfonie-Orchester Stuttgart des SWR (SWR Classic 19411CD).

It is a version that is markedly well-paced and deliberate, in no hurry to race along and fill two sides of an LP. And that is all for the best. Giulini's cosmos does not unfold rapidly, so that each section comes to a predetermined weight without haste, in a heavenly canopy that need not arrive anywhere according to a set timetable.

Bruckner of course is one of the weightiest composers in terms of large orchestral girth and a stoic refusal to entertain so much as bring a heavenly world to light, to the light, to life.

It strikes me on the 9th that many would-be Minimalists could learn from Brucker how repetition and periodicity could still take on a developmental forward momentum that avoids what in some hands is the mediocrity of the banal. Motivic cells germinate, spin around a vortex, then develop without  obvious, filler sorts of sequencing. The 9th has this wondrously spinning quality to it at times, sometimes as slowly as a huge cosmos of bulk like the heavenly material canopy of stars above us or of large sections of the universe that slowly turn in on themselves. One way to look at it is that Bruckner takes the leitmotif idea from Wagner and looks at it like a mass of cosmic frisbees.  He spins them in slo-mo throughout his musical universe, spiralling, mutating, sequentially jettisoning their way through an eternity that only lasts (practically) for over an hour. What glory is to be heard  in this opening up of aural things to our manifold listening experience! Seriously.

The deliberate interpretation Giulini gives us lends itself well to the stately,  ponderous spin of the music of the spheres as Bruckner hears it. And we can now perhaps gauge later Bruckner not just as some sort of obviously exploded Wagner. It is also music that hears in the heavens a spinning that post-High Modernism too hears in its own way.

Of necessity Bruckner could not really be the voice of God. So he is in a way the ultimate ventriloquist. God in this lushly, grandly exciting canopy is really the voice of Bruckner impersonating God! I can think no better (but a few equally) convincing versions of this most remarkable work and what it is doing.

I recommend this work as essential, this version as utterly proper and majestically uber-grand!
Posted by Grego Applegate Edwards at 7:10 AM