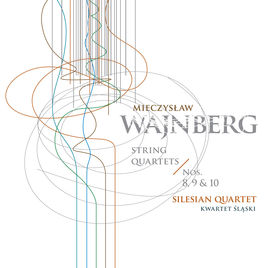 The story of why it has taken this long truly to appreciate the gifts of Mieczyslaw Weinberg (or Wajnberg in the Polish spelling) (1919-1996) has been told plenty of times on these blog pages and need not detain us. The very short answer might be simply Stalin. Weinberg was a Polish Jew forced into exile to Russia in WWII and the Social Realism dictates of the Soviet Union at the time were not conducive to what Weinberg was about as a composer. It's more complicated than that but that will do for now.

The incredibly prolific Weinberg completed 17 String Quartets. They, as most quartets in the Modern Era, can be looked down upon as formalist-subjectivist by a rabid Stalinist realism.  Accordingly the quartets were tainted by suspicion in the early years of life in his adopted homeland. That initial ill-will  put the quartets under a cloud in the years that followed.Yet there is extraordinary music to be heard there.  And Social Realism after all is a rather reductionist and delusional approach to what music is all about. Any theoretical approach that bans Weinberg has to be rejected. It is dead wrong.

The excellent Silesian Quartet brings to us state-of-the-art performances of Weinberg's String Quartets Nos. 8, 9 & 10 (Accord ACD 241-2). The incredible beauty of the opening adagio for Quartet No. 8 lets us know just how special these quartets are. They are a product of Weinberg's middle years, the first from 1959 when he was around 40, the others follow in succession, 1963 and 1965.

The liners to the CD make cogent mention of the autobiographical elements that appear in many of the quartets. The notes describe in 1963 the premiere Polish performance of any of his music, of  the Quartet No. 8, which at the time seemed insufficiently Modern to the audience, aside from the spice of some dissonance. They were used to the High Modern search for new sonarities and innovations in form, and Weinberg was more concerned with a music that was "intensely emotional, usually melancholy, dramatic at times." Such is the substance of these quartets, intensely Expressionistic, closer to a Shostakovich (a Jewish one for all that) than someone like early Penderecki.

From the vantage point of today, many will embrace these quartets for the reason that they are not Avant leaning. I myself feel that the addition of Weinberg should not be seen as a need to subtract early Penderecki, Boulez or Stockhausen. We can enrich ourselves all the more by allowing both musical visions to occupy our attention.

There are deeply introspective moments in all three quartets. Compared with a Prokofiev, Weinberg is a shade more bitter than bittersweet. And in some regards he is almost unrelenting in his serious outlook. We have generally seen such approaches to quartet writing from later Beethoven on, and perhaps after a time we will come to see the Weinberg cycle as we do the Bartok, the Shostakovich, the Carter, the later Beethoven works?

It is a moot point for the moment to me. What counts is to recognize the three middle quartets as very worthwhile and deeply absorbing listens, especially in these superb Silesian Quartet performances.

A sober sadness gets an equally emphatic and perhaps slightly macabre folk dance rejoiner as we follow movement-to-movement and recognize the depth of all we hear on this program. There is a definite temperament in play in the Weinberg ethos. The picture as conveyed by his music is seldom exactly rosy. The events in his life gave him plenty of cause to feel that way. And we can  appreciate the beautiful way he chose to express his temperament-biography in these quartets. Emotions are not funneled into musical expression in a one-size-fits-all manner. If they were music would be rather boring, wouldn't it? The triumph of Weinberg the composer is the triumph of invention over all personal obstacles. We can only rejoice at the results in this volume. Essential.