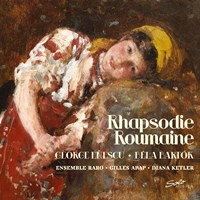 With the rise of so-called Nationalism beginning in the later 19th century and onwards, the new importance of local folk forms to the Modern Classical world became obvious, yet often enough remained  in an almost autonomous independance to Modernism itself. Both fed off each the other, yet could go separate ways at times while maintaining a contemporaneous existence, a  happenstancial presence in the present.

An excellent example of the interplay between folk and contemporary can be found in the musics of George Enescu (1881-1955) and Bela Bartok (1881-1945). Both were born in the same year and lived within a time frame that was identical, save an extra ten more living years for Enescu. Both also made extensive, pioneering use of Eastern European folk forms.

It is to the exceptional folk-based recreative music we turn with the recent volume Rhapsodie Roumaine (SoloMusica 277). On it we are treated to six compositional sets or individual works by the two, all centered around the vibrant reworking of Romanian folk moods, the rhapsody as reconceived in Modern-Post-Romantic terms. Authentic Romanian tonality-melody in the quasi-Gypsy expressive idiom makes powerful contact with the extraordinarily fertile imaginations of the two.

It is a mix of the familiar and less familiar, the classics and the reworked classics, the discoveries, the more obscure.

Enescu's "Romanian Rhapsody No. 1" gets a new version for piano quartet, while his exceedingly beautiful "Sonata No. 3 for Violin in A minor" receives near-ideal treatment by Gilles Apap on violin and Diana Ketler on piano. They do an exceptional job as well on the Bartok "An Evening in the Village" for violin and piano, and his equally stunning "Romanian Folk Dances. Sz. 56" for violin and piano. To top it off we hear Bartok's "Duos for Two Violins" arranged for two violas, plus the recently rediscovered Enescu "Nocturne 'Ville d'Avrayen'" for piano quartet.

The music has enough modernity that you would never mistake any of it for 19th-century fare. And there is an exceptional folk detail that keeps it well out of the sort of quasi-patronizing popularizations you might encounter in earlier works of a pre-revival kind.

The performances are uniformly sensitive and flamboyant as needed. The music is a joy and each piece fits fully into the thematic matrix to create a highly cohesive whole. Very recommended!
Posted by Grego Applegate Edwards at 7:03 AM