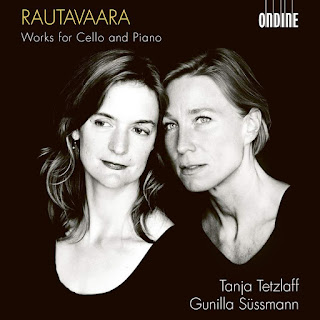 In the world of 21st century music, there are or were those whose principal years were last century and those whose main thrust has been in the new millenium. It can matter for roots and origins in complicated ways. And in the end we can think profitably in terms of generations, and then one might find alignments, or perhaps not. Everything in the stylistic creative zone since the beginning of last century has been in a delicious state of flux and generalizations may not always hold true as readily as one might like.

For now we might put all of the generalizations aside and turn to a single composer and his music. Where that music fits in will no doubt take shape as we go along in time. I am not going to try and force an easy typological judgement on the music today, though. Classification is critical for the internet yet in the end it can be too simple-minded to force something on a complex musical personality. Einojuhani Rautavaara (1928-2016) is our focus. His is a complex intersection of possibilities. He of course did a great deal of composing before the turn of this century and his musical personality stretches back to an early classic-modern period influence though his music has always tended to go its own way.

Today, most happily, we have a fine recording of Works for Cello and Piano (Ondine 1310-2), as performed with focus and rooted passion by Tanja Tetzlaff on cello and Gunilla Sussmann on piano.

The program covers nicely the extended period between 1955 when Rautavaara was in his twenties through to 2000 when he had reached his 70s.

The works keep a specially original style intact throughout, yet there is a great deal of growth to be sensed in that long gestatory period.

Kimmo Korhonen in the insightful liners to the CD sets up a sort of dichotomy of ways to create a lifetime body of works as a composer. On one extreme end, there are those that rather early-on create a particular stylistic universe and essentially work within it throughout their career, so that in some ways each  composition is a variation of each other composition, that the composer writes the "same" work over and over. On the other hand at the opposite end of the spectrum there are those who seek to create themselves anew at every moment, that realize a new possibility of music every time they write  a new work. On that end perhaps we might think of Stockhausen. On the other end there is Vivaldi?

Korhonen argues, to my mind rightly, that we most fruitfully can place Rautavaara in the middle of the spectrum. There is a neo-classical/neo-expressionist continuity to be heard in these cello-piano works for example, and yet each takes on its own special character within the continuum.

And in part the variable can be the degree of Modernity, so to speak? Some veer closer to the tonal end of chromaticism, others let go a bit more on the strength of a tonal center. Either way there is a a musical voice that calls out its individuality at all times.

So we can gain much from the form seeking yet mystically mysterious worlds of his Sonatas for Cello and Piano (No. 1 1973-73/2001 and No. 2 1991) We can hear the wonderful boldness of his 1955 "Two Preludes and Fugues." And there is the deceptively austere expressions of the Sonata for Cello Solo (1969). It fleshes out in your mind the more you listen.

There is no simple characterization of the music on this program. It is lyrical in its deep structure yet does not often wear that lyricism on its sleeve, so to speak. It is music that bears repeated listens by revealing a bit more of itself at each pass. It is a feeling person's music. But it is also a thinking person's music.

Very recommended for where we have been recently in our Modernity and its endless permutations. Highly recommended.