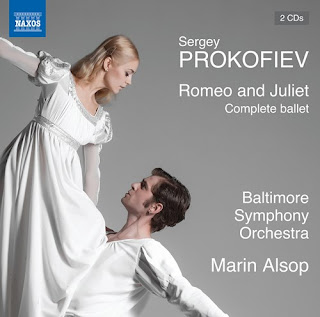 I don't suppose I will raise too many eyebrows if I say that Prokofiev's ballets to me rival those of Stravinsky. Well, maybe a few. It is hard to top "The Firebird," "The Rite of Spring" and "Petrushka." Nevertheless Prokofiev's "Cinderella" and "Romeo and Juliet" have an nearly equal power and charm to my mind. That does not mean they have had equal historic importance. Yet history is something that has passed and contemporary evaluation via continued performances is perhaps something else altogether. History is made. Contemporary appreciation either exists or it does not.

Since music should best not be viewed as a kind of horse race, since in the end once a composer is gone there is no true advantage of edging out a rival, none of this matters today. So for example when I find the Complete Ballet of Prokofiev's  Romeo and Juliet is available in a new version, I do not stop and try to rank its place in the pantheon. I simply want to hear it. And so I have gotten a copy and have been listening. It (Naxos 8.573534-35 2-CDs) is performed by the Baltimore Symphony Orchestra under Marin Alsop. Based on Alsop's cycle of Prokofiev's symphonies I knew the chances were good that she lavished an equal care with the ballet, and my expectations have been confirmed after a number of listens.

By the time Prokofiev conceived of and wrote the ballet (1935-36, 1939) the Soviet Union was developing a set of guidelines that amounted to a judgement irrespective of context of what works were or were not acceptable to the regime. So were sad endings permissible? It sounds ridiculous now, but that was a huge issue. So much so that Prokofiev's original version had Romeo and Juliet's mutual suicides avoided through a last-minute intervention by Friar Lawrence. The ballet was essentially prevented from having a full performance for a number of years because of the sad ending heresy!

Anyone who knows Prokofiev's musical personality must also know that a happy Romeo and Juliet would not be something Prokofiev would gravitate towards, since there is a bitter-sweet happy-sad element to his music at its finest. It is a key to the power of his music and also the power of Shakespeare's play.

So we ultimately should be glad Prokofiev had the courage to follow the story as it was intended to be told. The complete ballet has some of Prokofiev's most moving passages and all-in-all it has great appeal regardless of the circumstances of its making.

Marin Alsop and the Baltimore Symphony come through with a detailed, spirited and impassioned reading of the complete opus. This may not be Prokofiev at his most Modern, in spite of some huge dissonances and some idiosyncratically hard-edged moments in the score. It hardly matters or it should not when the music is this transcendent and lasting.

The memorable lyrical-brittle music for this ballet speaks to me as much as ever, in no small thanks to Alsop's loving attention. It is nothing short of a triumph, I must say. If you have not spent time with the complete Romeo and Juliet, here is the chance to do it with an excellent performance at a nice price. If you are a Prokofiev-aholic and have one or more versions, I suspect this version will be so balanced that you might well profit from adding it to your collection.

Well recommended.
Posted by Grego Applegate Edwards at 6:48 AM