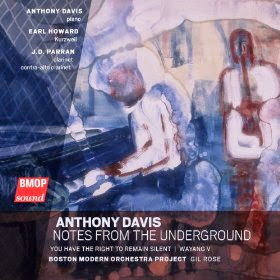 Of all the contemporary jazz artists who have crossed-over to classical orchestral music and other large-scale forms, Anthony Davis is certainly among the most prominent, with multiple compositions, performances and albums going back decades. He also is one of the most original, with a style of his very own. I consider him among a small handful of the very best jazz composers working in classical configurations.

Today we look at a recent release of some of his compositions for orchestra, Notes from the Underground (BMOP Sound) as recorded by the Boston Modern Orchestra Project under Gil Rose.

I recognize a few of the themes in the earlier works here as having been part of a recording or two a long time ago, perhaps with varying instrumentation (?). But in any case those recordings are no doubt long out-of-print and the current versions are excellent, definitive. Anthony Davis's orchestral music incorporates a modern contemporary stance along with his own brand of minimalism (usually more akin to ostinato riffing from jazz than mesmeric or rhapsodic repetition) and jazz-rooted influences.

The disk gives us three lively works: "Notes from the Underground" (1988) which adapts and transforms Duke Ellington's "Diminuendo and Crescendo in Blue" as a part of the orchestral dialog. It is dedicated to Ralph Ellison. "You have the Right to Remain Silent" (2007) uses the US Miranda arrest statement as a spoken, rhythmically developed speech-text that intertwines with jazz and orchestrally modern compositional dramatics. The work features in solo roles Earl Howard on synthesizer and J.D. Parran on clarinet and contra-alto clarinet. Finally "Wayang V" (1984) has a Balinese contrapuntal minimalist charge that conjoins with a jazz sensibility and gives the music an exciting edge. Anthony Davis appears as piano soloist.

So that is about the size of it. The volume gives you some very representative Anthony Davis works in focused, burnished, dynamic fashion. It is an excellent introduction to the composer for those who don't know his music but it will be a welcome addition to the library of those who already appreciate Maestro Davis as well. Very recommended.