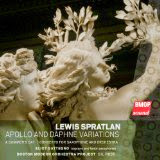 Some music, every time you hear it you notice new things. That was and is true of Markus Reuter's Todmorten 513, reviewed here last month. And no wonder. The work is almost like a musical Rorschach test--you hear what's there but your mind selects from all of it each time, beautifully so.

Lewis Spratlan's three works on Apollo and Daphne Variations (BMOP Sound 1035) have been that way lately. But maybe it's me. I've been writing 13 blog reviews a week for years, and every week I get calls saying "we're gonna take your house unless you fill out all this paperwork", or, "You owe $14,000; would you like to pay by check?" and I am dead broke, trying to pay attention to the music for the batch of reviews coming up. Or, hey, no money for the electric bill, what are you gonna do? Must look for and apply for 20 jobs per week! And on and on! Not to whine. That I've managed to say something about the music regardless of the worst kind of life for this long is a minor miracle. But I digress and nobody really wants to hear that their reviewer is experiencing dire straits! I don't get paid to do anything, I have no income, but that's my problem. How much longer I can keep churning out reviews like this is anybody's guess. But sometimes I may take a few more listens in the middle of all the crises to get the music in my head. And not all music is self-evident! Nor should it be...

So, Lewis Spratlan. His music on the Boston Modern Orchestra Project album is packed with so much detail, there is so much there, that you keep noticing more to like as you go. The three works are multiplex stylistically but they hang together well in various ways.

There is "A Summer's Day" (2008), which fits well with what we in this hemisphere are experiencing right now, myself included. Each movement is descriptive of summer and its experiential moments, culminating in "Serene Evening, Soft Breezes, Crickets, a Distant Storm" (movement seven) and "A Starry Night" (movement eight). Beautifully descriptive orchestral writing and very copiously elegant event periodicity are very much what we get. Ives in thickness at times. Other times, something else altogether. But always contentful.

The "Concerto for Saxophone and Orchestra" (2006) features Eliot Gattegno on soprano and tenor sax, well-played. It too has a periodic feel, with jazz inflections, rhapsodicity and modernity rubbing three hands together in fascinating episodic ways.

The title work, Apollo and Daphne Variations (1987) comes out of a disarmingly, deceptively simple waltz tune Spratlan put together in the context of discussing Schumann's alphabet motifs in a composition class. It grew into a full-blown and vary varied set of variations.

It's all good. Gil Rose conducts the Boston Modern Orchestra Project with verve and understanding and the orchestra responds accordingly, idiomatically.

You'll find a wealth of musical modernity and a lyrical tunefulness in these works. They stand out by taking form gradually and then implanting themselves in your musical memory, bit by bit. Emphatically.

I love the music! You may feel the same after some listens, even if you are having those 21st century traumas that beset many of us today. A sure antidote is at hand on the Apollo and Daphne Variations disk.