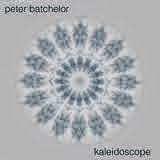 Not every modern electro-acoustic/electronic composition jumps out at you like a jack-in-the-box. Some works say what they want to say in slowly unwinding narratives, so you have to open up and concentrate over time to get what the composer intended.

That's how Peter Batchelor's series of works collectively known as Kaleidoscope (Pogus 21073-2) plays out--slowly. There are five segments in all, four in the "Kaleidoscope: Cycle" and one in "Kaleidoscope: Arcade". They were composed for eight-channel playback and the set comes with a DVD that allows for that (or for that matter 5:1). The CD gives you a two-channel version.

The various sections were composed between 2004 and 2013. It is a music of silence and sound, the sound being mainly unpitched event fragments with some recognizable but electronically transformed pitched elements entering into the segments at seemingly critical junctures.

It is music for the long-haul, long-formed unfoldings of abstract sound, some of it rather quiet, all of it less performative than discursive, a thoughtful conversation of sound between aurally transformed sound materials.

The multi-speaker DVD version brings out the discursive give-and-take of the music more dramatically, but the two-channel CD version brings it together in ways that remain comprehensible.

I won't say that this is my favorite electronic work this year. It is a work that I need to hear more. There is a particular complexity that does not readily avail itself to you without study, close listening in an undistracted environment.

Give Kaleidoscope that attention and you will begin to feel its importance. That is saying something. Whether this is "great" or only extraordinarily interesting (which is enough) I have not decided. Time is necessary! Give a listen and decide for yourself.