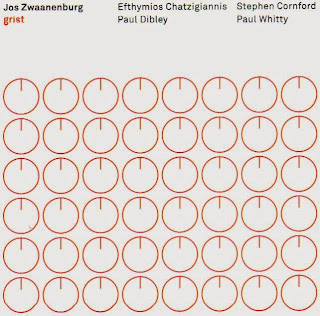 The avant garde world keeps turning. It doesn't stop. Flautist Jos Zwaanenburg reminds us of this via his new anthology of music for flute and electronics, Grist (Metier 28542).

We get five provocative, sometimes noisy, cutting-edge works, each defining the new terrain in its own way. Efthymios Chatzigiannis presents "Broken Mirrors"; Paul Whitty gives us two compositions, "Does the body rule the mind or does the mind rule the body" and "Has the world changed or have I changed?"; Stephen Cornford chimes in with "Flute Feed", and Paul Dibley gives us "Organ Grinder".

Some works are more obviously flute-full, some more overtly electronic. "Broken Mirrors" combines flute improvisations with a program that in turn responds to those passages. "Flute Feed" makes use of aleatoric elements in the interaction of flute, resonating piano and digital feedback. "Organ Grinder" uses live flute, sampling, live electronics and computer generated sound. Paul Whitty's two works are densely thick, noisy electronic montages that create a thicket of original sound that is not to be denied, yet fascinates thoroughly in any event.

These are all works that bear study and close listening. Jos Zwaanenburg has an integral role to play here and he does it with a kind of selfless devotion to the compositional demands of the moment. He shines forth when called for in ways we can admire and at other times he gives the impetus for the evolving shape of a work with creativity and sensitivity.

This is not so much a flute tour de force as a set of interactions of Zwaanenburg and electronics. It bears repeated listens. State-of-the-art live and interactive electronics are the order of the day. Well worth hearing.