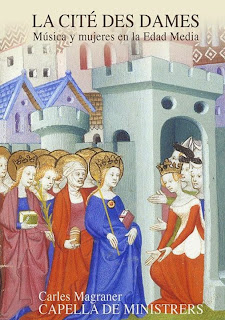 The unusually themed, beautifully produced album I have before me brings us a side of the culture and music of the Middle Ages we do not encounter often unless we are specialists on the period in relation to women. La Cite des Dames by Carles Magraner leading the Capella de Ministrers (CdM 1333) is based on the Book of the City of Ladies, a feminist utopia of sorts written by Christine de Pizan in the early 15th century. It was penned in reaction to the disparagement of women in medieval society as contained in philosophy and theology writings then current. She envisions a City of Women, where females of virtue and ability take on all the civil and cultural functions of a metropolis.

The 2-CD set and nicely produced hard-cover booklet that accompanies it seek to recreate that female city, in paintings of the era and music sung by women, often written by women composers. This is music of the Middle Ages in modern performance practice, where the music is reconstructed with all-original instrumentation in what one may say results in a more folk-ethnic sound than was the case in typical recordings before around 1970.

It is a series of sacred and secular music by Hildegard of Bingen and a host of woman composers whose names you probably have not heard of before: Herrada de Landsberg, Abadia de Fleury, Beatriz de Dia but then also Ana Bolena. There are some anonymous musical figures here and there as well but everything fits together convincingly as an imaginative musical portrait of a world where women do it all as well or better than men.

This is memorable music performed with real period sensitivity by the Capella de Ministrers. Musical director Carles Magraner prepared the program with some care. The results are quite near magical.