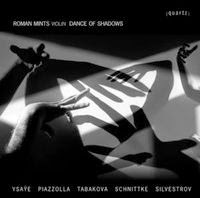 Violinist Roman Mints gives us a program of works for solo violin with radiance and dynamic life. Dance of Shadows (Quartz 2103) covers selected composers in stylistic zones from late romanticism to the contemporary with the emphasis on the wide range of tonal colors and dramatic breadth that the concert solo violin is capable of today.

To further enhance the colors inherent in each composition, Mints and the recording team make full use of the recording studio. So at times there are passages recorded as if the violinist were at different points of the concert hall. For example, with Ysaye's work, significant phrases that are derived from Bach are played with a more cavernous sonance as if the composer were remembering Bach's music, then responding to that memory with his own compositional thoughts. The Piazzolla work was recorded close-miked to give the work a more pop sound, paralleling allusions to the popular tango strains the work plays upon. Tabakova's folksy-archaic work utilizes multi-tracking so that Mints can play the hurdy gurdy part as well as the part for solo violin.

What makes it all work is that there are subtle sonic shifts and they are used sparingly at the proper times. Mints plays conversely with great passion or a ruminating quietude according to what the score calls for. It is music of wide dramatic contrasts that both Mints and the audio team capture with elan and verve.

Every work here is in its own way a gem. Time is a factor throughout, whether quoting from Bach, Paganini or alluding to folk strains or popular tango melodies. In one way or another the past and the present interact continually.

Mints has a beautiful sound and a great deal of technique, all of which is put to work to realize the special sonic worlds in each work.