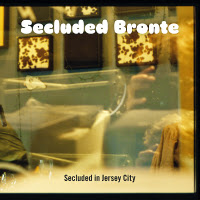 Before the 20th century got underway in earnest, noise was something well-defined. It was sound refuse, the by-product of productive manufacturing, machines, people making a racket. It was undesirable sound. If the term were ever applied to music then it was generally in disparaging ways, with the notable exception of the biblical phrase "make a joyful noise unto the Lord", but that was intended more metaphorically than literally. If anyone has information or thoughts to the contrary they are heartily enjoined to add a comment at the bottom of this article.

The Futurists early in the turn of last century got things started by sometimes incorporating noise elements into their sound-art assemblages. It has been a part of modern avant garde music making ever since, especially from the 1950's onward.

Secluded Bronte is a three-person avant music collective that incorporates noise into their music events. Adam Bohman, Jonathan Bohman and Richard Thomas put together a series of recordings using an array of musical and homemade sound producing devices, from toy piano and cymbals to balloon horn and bottles. Then in a live broadcast on the free-format New Jersey radio station WFMU the sounds were disassembled and reassembled live in a collage mix broadcast for the Dave Mandl "World of Echo" show. Or at least that's how I gather the processed results were produced.

The final product, five collage tapes created by Adam Bowman, are contained in the 22 minute EP Secluded in Jersey City (Pogus 21075-2). It is avant music that operates in a middle ground between "pure noise" and "melifluous tone", or in other words much of the tone-noise produced has pitch as well as timbre, though nothing close to a melody line emerges.

It is sound art that has something in common with John Cage's early tape collages from the fifties, in that there are endless sound combinations, much of it unpatterned, all of it of sonic interest.

This may not be totally indispensable for that new music avantist, but it certainly grabs and retains interest, has evocative qualities that even the novice with an open mind may find interesting, and so may be something you might put on for someone who wants to know what is happening in avant music lately. The collage technique is not accompanied by a great deal of signal manipulation as much as radical re-sequencing, so there may be more of a sense of comprehensibility for an untrained ear. I do not know because I did not try playing this for my neighbors.

What matters is the poetic qualities of the sound-noise-music. And that is at a high level for the duration of the CD.