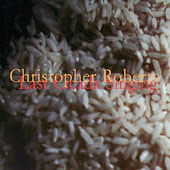 What is possible in today's music is nearly endless. So today we have one possibility of many, a good idea realized with virtually every nuance you might expect in such an encounter. It is the interaction of a composer-musician of the West with a Chinese stringed instrument that goes back to antiquity, namely the Chinese instrument known as the qin.

The qin is something akin to the Japanese koto, for a quick analogy. Its sound, when combining different techniques--the harmonics, sounded notes and slides, has a feel perhaps more intimate than its Japanese counterpart.

So what we have is Christopher Roberts in a 30-minute recital of his new music for the solo qin. It uses the alteration of sound and brief silences as does traditional Chinese music for the instrument but the musical content has more to do with western "radical tonality", new music with a key center but otherwise a unique postmodern take on how tonality can play out.

All this on the Cold Blue EP CD Last Cicada Singing (CB0034). Like traditional Chinese music for the instrument which uses gestural phrasing to convey nature as an art form, the title piece especially but all the works presented here make direct reference to such concerns. The entire album has a meditative cast that manages to convey nature in its unassuming presence as felt by the solitary maker of musical sounds.

The album is filled with a kind of quiet luminosity hard to resist for those used to concentrated listening. It is not perhaps what you expect of Western new music, but that in itself is of significance.

Christopher Roberts gives us a rarefied glimpse of music-in-being that may well become a favorite for when you are in the mood to get inside the quietude of nature. Highly recommended.