John Holloway, Pavans and Fantasies from the Age of Dowland 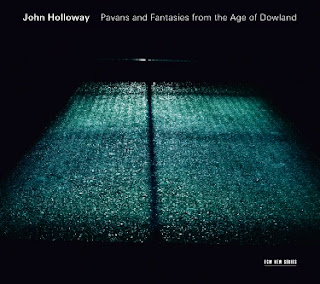 John Dowland's music often had a special melancholic mood to it, no more so than in his Pavans. Over his lifetime (1563-1626) and in that age in general there were others who wrote music that was tinged with a sadness that must have struck a nerve with the music audiences of the day. John Holloway's Pavans and Fantasies from the Age of Dowland (ECM New Series B0020796-02) gives us an entire program of characteristic music as composed by Dowland and his contemporaries.

Violin-Violist John Holloway leads a string quintet through 13 relatively brief but quite moving pieces. The ensemble of strings led by Holloway is not typical by modern standards, but not necessarily out of place for the performances of these works in the original period. Much of the music was meant to be played by lute alone, or lute with strings, or strings alone. Holloway decided for a quintet of two violins/violas, two violas and a bass violin which suits the part-writing quite well and gives the music a somewhat darker tone than other possibilities would have done.

For John Dowland's masterpiece, the "Seven Pavanes--Seven Teares" all four of the upper-range string players play viola, which are closer in range and tone to the violons of Dowland's era. Interspersed between these remarkable works are six works that more or less parallel the mood and fill out the program nicely. They are short, often equally melancholic works by Henry Purcell, William Lawes (2), John Jenkins, Thomas Morley, and Matthew Locke.

The interspersing of other period works in between the Dowland affords contrast and makes for more dramatic re-entrances of the characteristic melody line that begins each Dowland Pavan in this series.

In the end we get a beautifully sad Elizabethan, late-Renaissance evening of exquisite music, played with sensitivity and subtlety by Holloway's string consort. The music thrives with a pure, vibrato-less playing style that brings to the music a natural, pre-romantic balance that conveys feeling in a more contemplative, less exhibitionistic way than is typical of later periods.

It is a very satisfying, convincing performance of music that combines a dark sorrow with a sweet-bittersweet aura that was perhaps unique to Dowland and the English school of his day. Holloway and his ensemble do the music total justice. Hearken and you will find much to appreciate!