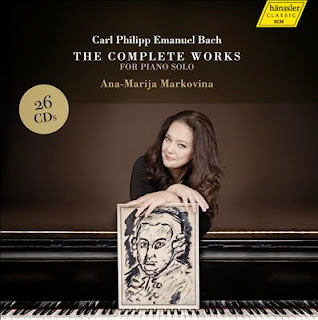 Anybody who knows something of the history of classical music ancient-to-modern probably is familiar with the fact that composer Carl Philipp Emanuel Bach (1714-1788) was in his lifetime considerably more famous than his father Johann Sebastian Bach. Nowadays of course that is the reverse case. But then Johann was considered somewhat "old hat" while CPE was au courant, a central figure in rococo-to-classical period music, a hero of the modern world of music at that time.

If later reception history has not favored CPE as much as Johann, it doesn't mean that CPE was not highly influential and it does not mean his music can not speak to us today.

If it were not so, why would anyone produce a monumental project that is now complete and ready for our ears? I speak of the 26-CD (!) set of CPE's Complete Works for Piano Solo (Hanssler Classic) as played by pianist Ana-Marija Markovina. Now mind you, I have not listened to all 26 volumes. But I know already a fair amount of the music and I have listened closely to the sampler. And from that I hear some gloriously expressive piano performances of some wonderful music.

Ms. Markovina gives the music the loving attention it deserves. She brings out the proto-romanticism, the high expressions of CPE, something that both Mozart and Beethoven learned much from. Like Haydn in his "sturm und drang" and last periods, there is music here that prefigures what is to come, a depth of feeling and a sometimes heroic lyrical strength that was not the norm of the era, certainly. What followed he had something important to do with, as you hear in concentrated form in the piano works. Perhaps most importantly this is wonderful music from a major composer of the era, now finally getting his due.

Based on what I hear in the sampler the full set should be a revelation, a must for all thorough connoisseurs of the era and what followed. We perhaps now have even more evidence why his music was so well-appreciated in his day, though of course nothing will take away the exceptional excellence and our present-day appreciation for his father. The son was glorious in his own way. This set promises to set things straight in terms of his pianistic output.