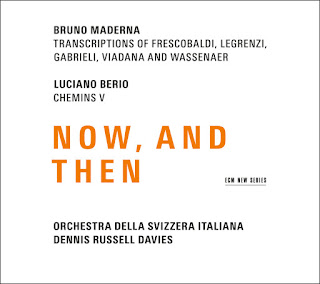 As the agents of cultural and natural change are ever at work, we too make whatever change we can in our everyday lives and look ahead to a promise of better. The pressure of a newness can be unrelenting. There are times when there needs to be a pause, to make possible the verdure of revival, to give a space for a new becoming. Musically we ever need to look ahead as we look back.

As if to make that freshening an aesthetic reality, there is a recent release to give us a space of introspective languor and at the same time a new take on the modern project. Dennis Russell Davies and the Orchestra Della Svizzera Italiana pluck gently for us a crop of 20th century modern memento mori if you will, in very past-in-present, recent-past-presently works by Bruno Maderna and Luciano Berio, Now, and Then (ECM New Series 2485).

What we hear are a series of reworkings of Frescobaldi, Legrenzi, Gabrielli, Viadana and Wassanaer, transcriptions with beautiful orchestrations that make a currency of the ancient wonders we can hear very anew. There is a poignancy to these reawoken transcriptions. Maderna is an orchestrational titan and he makes it all glow.

As if to remind us that we can go back to high modernism with the same refreshing new hearing outlook, Maderna's contemporary Luciano Berio (whose "Folk Song" arrangements come very much to mind in the wake of the Maderna here) has a nicely contrasted presence with a world premiere recording of the orchestra and guitar  "Chemins V," which is a resetting of the solo guitar "Sequenza XI." There is to be heard the wonderfully resonant modernist Berio, a vastly rich human modernism that has more than advanced syntax alone, the more of which all modernists need bring to the music for it to thrive.

That is the nuts-and-bolts of this recording. Performances are striking, recording values as fantastic as you would expect. The Now, and then old-in-new-in-new has a rejuvenating grace to allow you another feeling of present-past, to drive you to reflect that all past music, even later modernism takes place in a continuum that this program inscribes into your musical memory as it gives great pleasure in the doing. So I highly recommend it to you.
Posted by Grego Applegate Edwards at 12:04 PM