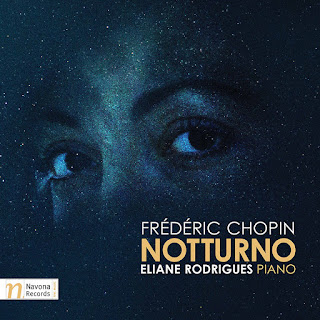 To close out a very hectic week and to bring in a Friday vibe, I'd like to highlight an album that has grown on me with successive listens to become something I welcome very happily each time I hear it. It is Brazilian born pianist Eliane Rodrigues and her ravishing interpretations of some monumental Chopin, those "Nocturnes." Notturno (Navona 6123, 2 CDs) covers all the "Nocturnes" plus the first and fourth "Ballades."

It is hard to imagine any piano music in the later half of the 19th Century on in the classical realm that was not influenced by the lyrical Chopin, certainly Liszt through Ravel but onwards from there to the modernism and postmodernism pianism, any music that still gives out with the singing cantabile style he did so much to put forward.

For the Romantics there was magic in the night. It was the principal source of poetic mystery, of aesthetic yearning, of the ineffable landscape of dreams and time endlessly stretching backwards to fable, myth, and a tide of feelings of awe in the face of Creation.

The Notturno captured the dream-filled night like no piano music before it. And as we listen today it remains a singular moment in the piano literature. Never was so much lyricism packed into every space, never did the piano sing quite like this before!

Like some others of my generation I poured myself into Chopin with a comprehensive LP set of the complete (or nearly complete) Chopin piano opus. Some versions of things were better than others. It was all Vox stuff. The recordings often enough reflected the kind of bombastic renditions typical of the late '50s-early '60s. Not all of it. It did give me a decent introduction to the Chopin all-of-it and so it was a good thing. And I could afford it.

Of course those versions were in no sense the all-in-all, as I quickly discovered. And now....Listening to Eliane Rodrigues and her way with the "Nocturnes" I find myself transported into a world of sounds as Chopin no doubt heard it. In the hands of Eliane Rodrigues all the poetic dreaminess comes into play. The extraordinarily sensitive performances made me say to myself nearly involuntarily, "only a woman can sound like this!" I started. Really? No, not really. Still, perhaps it is more apt to say instead that "only Eliane Rodrigues sounds quite this way!" That I find is true. The rhapsodizing and the breath-like rubato does not have a trace of sentimental affect. It sings with brilliance and makes for a near ideal set of performances. She may not be as technically perfect as some of the old greats, but she makes up for that with a spontaneity of life-born expression that rings true, as true as any version you are likely to hear.

Keep in mind that there is no advantage for me in saying this, or anything else on here. It is all about the music and not about some personal gain. I speak my feelings fully. If this performance rings my bells, I also do recommend you check it out and see if it doesn't do the same for you. We do not live forever, but wonderful music gives us some glimpse of human immortality. This Chopin, this version...it is something beyond our time or any other. Do try this out. See for yourself.

Posted by Grego Applegate Edwards at 7:15 AM