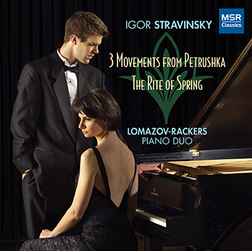 The monumental breakthrough works of Igor Stravinsky were at first as much about orchestration as anything. He used the orchestra in ways that fully extended what Rimsky-Korsakov had in turn extended from the Impressionists. And so works like Petruska and The Rite of Spring rang with an unforgettable sonance. We of course have lived with these works a century or more. And too it is the sequence of the notes that were a magic in themselves, an originality that beguiled with Petruska, then at first became shocked with Rite. There was an expressive opening out with these one-after-another works.

After listening so often to the final orchestrated versions over the years we can sometimes be so accustomed to the full unfolding in orchestral terms that we lose sight of the paradigmatic blossoming of the tones as a whole. So then it becomes time to make it all fresh again. An excellent means to that is in the piano four-hands arrangements of the works: 3 Movements from Petrushka, The Rite of Spring (MSR Classics 1628), as played by the Lomazov-Rackers Piano Duo.

These are of course two of the seminal breakthrough works in the advent of the Modern movement in music.That a century has passed since their first hearings is in many ways a blessing. We KNOW the music, understand it, and can with the right people push the performances further onto those pathways of what we hold to be so, what we can now hear clearly looking back from the vantage point of the present. So much has come after, as if to bring out the essence of this music and what it has done for us.

The Lomazov-Rackers Piano Duet make an ideal vehicle for these works. Clearly both have lived with this music intimately and can re-execute it all in ways that a long, lingering living-within makes possible a new possible.

So the Petrushka burns as brightly and as excitingly as it ever has in the piano reduction. It dazzles with light. The Duo have a technical prowess which is put in service to the music as it can be brought out in the most exciting manner. It is a wonderful thing to behold!

Then the Rites come through in ways I have not heard bettered. There is masterful control at work. The music no longer seems complicated and ineffable. It is perfectly, palpably clear and makes vibrantly musical sense. If anybody once feared or was outraged by this music, it is laughably behind us. Except there are people you might run into who cannot even understand Beethoven! My mother told me after she had finally gotten it all that "There used to be a man in the apartment downstairs from us who played classical music 78s. I was frightened by it. Until now."  The present among other things is a time where the modern begins a full assimilation into the folk mind. In my mother's lifetime Beethoven became mainstream. Now today another embodiment, the modern as part of the everyday mind and ears? Yes. And nowhere better to assimilate it than with this disk by Lomozov-Rackers.

The future may still be the past, but we are catching up slowly. Anybody who might take the time to listen carefully should find the present disk a very heartening thing. I cannot think of better performances! So you should listen! Buy with confidence.
Posted by Grego Applegate Edwards at 7:33 AM