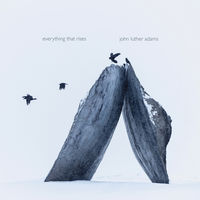 Everything that lives, laments, everything lost may yet be regained, and Everything That Rises (Cold Blue Music CB 0051), well, that is the latest music, a String Quartet, by John Luther Adams. The remarkable JACK Quartet does the honors.

The music is perhaps more processual than minimalist. There are long foundational notes in the cello and a series of rising scale-ular motifs in the rest of the strings, in delicate untempered intonation. The artful articulation of sequences helps via gloriously rich attacks to give the upper notes transparency and vertical flight as they also create overlapping harmonic sequences with distinct timbral colors that stand out as special.

The movement of notes gives us another possibility in the Radical Tonality camp. It rises in melodo-continuity, not so much in contumacy against the orthodox but as another alternate lawful structure if you will. It has a real cosmic endlessness that feels as if it reaches ever higher. The effect  is well felt though underneath it is physically limited by the cloudcover options of range in the harmonics of free flight.  It never feels that way as you listen, which is what matters. And in the end there are some very high notes to boot!

It spells a reaching ever upwards and so exhilarates in its passage through our musical selves.

The sequence of soundings, as one ever expects from John Luther Adams, is most artful. And the performance and audio quality are world-class as one expects ever from Cold Blue Music releases.

It has a kind of organic-melodic arc that is very pleasing to hear repeatedly if one is willing to suspend judgemental expectations. The sound colors are quite beautiful to behold. For these reasons and for the way the music ever expands one's horizons I do not hesitate to recommend it heartily. Its value to me is as plain as the nose on my face. Enough said.
Posted by Grego Applegate Edwards at 6:56 AM