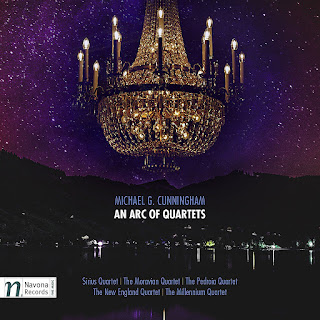 Those talents who keep on producing despite less exposure than ideal may find themselves heard widely at last. US native Michael G. Cunningham (b. 1937) seems an excellent example. He has been composing since 1958. Navona Records has been releasing recordings of his music for a while. After five of mostly orchestral works we now have a fine chamber gathering entitled An Arc of Quartets (Navona 6081 2-CDs). It is the complete quartet output by Cunningham to date, from the No. 1 of 1959 to the No. 7 of 2016.

If it sounds patronizing to say I was surprised to hear such fine music, I only mean that any new (to me) body of quartets faces the stiffest challenge from the past quartet giants of the repertoire, obviously the late Beethoven quartets, then so many after...Berg, Schoenberg, Debussy, Ravel, Hindemith, Bartok, Shostakovich, Ligeti, Carter, and on (leaving out some for now). After all the string quartet has risen to a medium where some of the most "serious" and uncompromised music has been made up to our own times. Can Michael G. Cunningham meet this challenge and win us over on his own terms? The answer, very happily, is yes.

All the quartets but the first have descriptive subtitles, "Three Satires" (2), "Partitions" (3), "Interlacings" (4),  "Aggregates" (5), "Digital Isorhythm" (6), "Back Home" (7). The descriptive phrases give notice that the music is "about" something more than abstraction, that the intricate and moving high modernist post-Bartokian style has a human subject at its base.

These are quartets in the grand modern tradition if you will. Deeply intricate, interactive, and probing are all of them. It is a milestone set where we may not expect to find them, only because Cunningham is for most of us only now emerging into our musical life.

I do recommend this for any modern string quartet enthusiast. It rightfully holds its own and seems destined to take its place in chamber gems of our modern period. Get this one by all means.
Posted by Grego Applegate Edwards at 6:33 AM