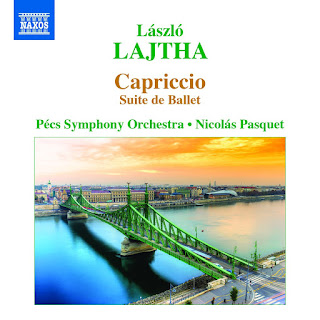 In the world of modern Hungarian music Laszlo Lajtha (1892-1963) rivalled Dohnanyi, Bartok and Kodaly for the most important composer of the first half of the 20th century. Naxos has embarked on a series of releases covering the composer and his music. This latest one was recorded in 1994 and features the Pecs Symphony orchestra under Nicolas Pasquet. It is the Suite de Ballet Capriccio (Naxos 8.573649).

The 14 short movements give us a more whimsical side of the composer, befitting the lighthearted subject matter set in  1700. It was composed in 1944.

It gives us a glimpse of his non-strictly symphonic output and miniaturist side. It is charming fare, not precisely earth shattering but quite nice to hear.

It is rather surprising given this and the symphony CD   I reviewed a while back (Symphony No. 2, see last January post) that we in the States have known little of this music. Capriccio is neither avowedly Modernist nor is it overly Romantic. Perhaps it is rather Neo-Classical in its own way. It is well crafted, well orchestrated and performed with some zeal and precision. The Hary Janos Suite by Kodaly might me something comparable, except Capriccio sounds less obviously Hungarian.

Lajtha turns out to be essential listening for anyone interested in the Hungarian legacy of last century. There is elegance and straightforward attactiveness in the Capriccio score. It is worth hearing, certainly.
Posted by Grego Applegate Edwards at 6:24 AM