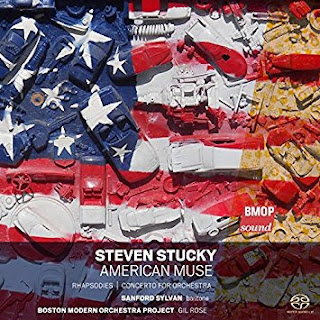 Composer Steven Stucky (1949-2016) was an American original. That doesn't mean that hearing his works will turn your musical expectations upside down. His music has a subtle, modernist coherency of craft and inspiration. We hear him at some length on American Muse (BMOPSound 1050) another fine volume in the Boston Modern Orchestra Project devoted to deserving American Moderns.

The performances are of the caliber one comes to expect from the BMOP. There is a requisite depth and detail that these works demand.

Three works invite themselves to our inspection and pleasure. Stucky in the informative liners sees himself arising out of the classical tradition rather than blazing forth as an avowed iconoclastic innovator. He is a Brahms in contrast to a Wagner, more a synthesist than a tabula rasa.

The first is the 2006 "Rhapsodies," a short prelude to the two substantial works that follow.

"American Muse" (1999),  the title composition for this program, has breadth and depth. It has a moody precision born of the best sort of conflation of text and tone, expressively dramatic brush strokes against luminous transparencies. Like the work that follows, "American Muse" comes out of the mist to take shifting form with a palette of orchestrational wholeness.

And finally we hear a very glowing turn to pure music in Stucky's 1987 "Concerto for Orchestra." A sort of bookending, an expressive abstraction-synthesis of perhaps a Ravel and a Ruggles can be discerned if you linger with the start and end points of "Rhapsodies" and "Concerto for Orchestra." A more Whitmanesque turn to sequential metaphoric realism fills out the space in "American Muse." Together they form a vibrant introduction to Stucky the overarching reworker of what-is to get a what-hasn't-been.

It is music you must live inside of for a time. That might be said of much of what I cover on these pages. But I must say that Stucky quite palpably emerges in his full musical personality in increments as we listen between the spins of our periodic existence.

Bring yourself to this music. It will add something to your life. All great art builds a space inside you if it is allowed to do so. You are the host for a musical organism that extends self rather than parasitically feeds off of it. We are the better for it. And so I recommend it to you.
Posted by Grego Applegate Edwards at 6:58 AM