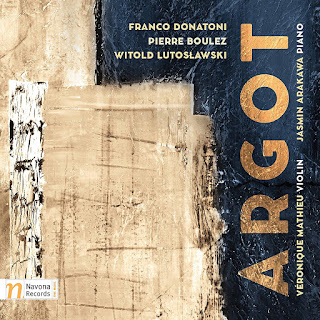 The present-day modern era has seen a great rise in literature for the solo violin. With some notable exceptions in the romantic era, there has not been such a flowering of this instrumental choice since the times of Johann Sebastian Bach. Today's release includes two such works, well played by Veronique Mathieu.

First up is the title work "Argot: Due Pezzi per Violino" (1979) by Franco Donatoni (1927-2000), one of the premiere modernists on the Italian scene after WWII. It is a work of demanding agility for the player, both exploratory and filled with flowing musical syntactics. Ms. Mathieu carries the day in a very musical yet spectacular manner.

Pierre Boulez (1925-2016) I imagine needs no introduction to readers of these pages. His "Anthems I Pour Violin Seul" (1992) has the rigor and energy one might expect from the composer in his later period.

Mathieu shines brightly on this program. Arakawa tends well a second flame as brilliant as the first in the second half of the proceedings. All listeners to the modernist excellence to be heard so abundantly will surely find in this album much to treasure. The Lutoslawski makes it all worthwhile; the Donatoni and Boulez give us pause and show us vibrant possibilities we are glad to contemplate and experience.