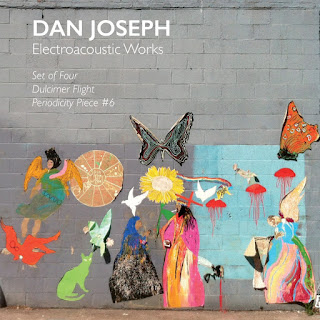 Listening to the drone-sustain Electroacoustic Works of Dan Joseph (XI Records 138, 2-CDs for the price of one) is something like watching a beautiful sunrise. Except of course in periodic time more so than in space, though there is a good bit of vertical presence.

Joseph studied with Pauline Oliveros, Alvin Curran, Mel Powell and Terry Riley, which gives you a clue to what his music does. He has been a New Yorker since 2001. Alan Licht's liners tell us that Dan has been "a drummer, a shoegaze/post-punk guitarist, an ambient-industrial tape music artist and a post-minimalist chamber music composer." All of that either more obviously or more subtly comes into play in this set of exceedingly beautiful electroacoustic works.

Alan Licht in the liners makes note that we are here beyond the timeless quality of early minimalist works. Instead Joseph's electroacoustic pieces have about them a timeful periodicity. It is most obvious in the enchanting "Periodicity Piece #6," in the recurrence of punctuated elements that segment the drone-sustains--an electronic beep, a low percussive interjection, etc. Licht also notes that the Joseph electroacoustic brand of post-minimalism is more about repetition as mnemonics more so than trance. That is in terms of performance more so than listening. I do feel as I listen a kind of trance-like repose. It does not matter because it is a float more than a spin as you listen, and so the non-spin is not so trance inducing. OK.

Each segment has magic.There is unfolding within blocks of suspension. The hammered dulcimer is often enough a prime source of sustain and also of punctuation, but then there are electric guitar harmonics, what sound like brass sustains, etc.

A poetic soul. someone used to drones and ambient edifices will take to this dreamily.  Others like my partner of the now might not. She referred to it as "garbage," a reaction which might be a sort of "exception that proves the rule," since this to me is not at all some sort of refuse, but more like an oasis in a desert.

Needless to say, if you love ambient spaces of beauty I do believe this album has your name on it! It will transport you, beam you up to its feathery cloud-laced canopy. I want to hear more of Dan Joseph after this. That is the best sign for me that it is important.
Posted by Grego Applegate Edwards at 6:58 AM