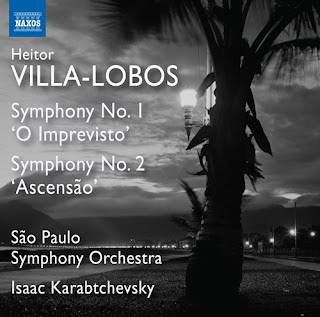 The early Modernist opening decades of the 20th century were by no means predetermined by what came before. Sure, the advent of a thoroughgoing chromaticism and the edges of tonality could logically be inferred from Wagner's Prelude to Tristan and the general tenor of Late Romanticism. Nothing was inevitable, however. So the rise of a key Brazilian composer was not expected. And yet Villa-Lobos came on the scene and gradually provided his own unique folk-based chromato-dia-Modernist approach.

We can go back to a freeze-timeframe and experience the two symphonies be began in 1916 and 1917 (with the latter taking its final form only in 1944). Isaac Karabtchevsky and the Sao Paulo Symphony Orchestra allow us a focused look at Symphony No 1 "O Imprevisto" and Symphony No 2 "Ascensao" (Naxos 8.573829) as part of their complete symphony project.

Anyone who already loves Villa-Lobos as I do will find more undiscovered treasure in these early opuses. They have the germinal elements that would become more refined and orchestrally more transparent and luminous in his maturity. And in the early phase here there is perhaps a naive quality that conjoins with folkish-expressive diatonics and some modernist chromatics for a rather buoyant and disarming effect. The second is nearly twice as long as the first at 48 minutes. It is the more expanded development of the implications of his initial symphonic strategy.

In no way are these works a rusty-rustic opening salvo. They cohere as a first stylistic emmination, lush and evocative even then of his kind of Brazilian-modern rhapsodistic unpretension.

Any Villa-Lobos lover will find these symphonies a welcome and enlightening addition. The performances are well in hand and give us a quite decent idea of what the scores contain. So do not hesitate if these seem interesting to you.
Posted by Grego Applegate Edwards at 6:21 AM