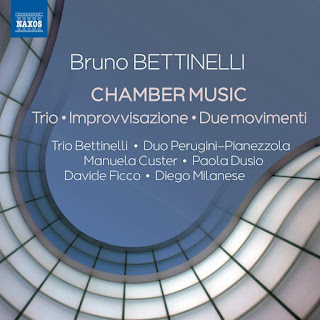 Every month as a reviewer brings me a spate of composers I have yet to discover. Some from right this moment, others recently gone, others of course from some earlier period. Today we have yet another, one Bruno Bettinelli (1913-2004).

Bettinelli was a successor to the Italian 20th century lineage of composers that include Respighi and Casella, somewhat less so the Serialist-and-beyond camp of Dallapiccola, Maderna, Berio and Nono. Yet there is a structural concern to be heard in his works and an abstractive flair that makes him a full Modernist at heart. At least that is what I hear and appreciate on a new recording simply entitled Chamber Music, with mention in the subtitle of three of the important works to be heard in the program, Trio, Improvvisazione, Due movimenti (Naxos 8.573836).

What is perhaps most remarkable about these pieces is their refusal to settle down into an easily characterizable niche, and in a related way, their refusal to supply a crowd-pleasing literary or thematic "hook." The Modernism lingers on the edges of what was in demand at the time. There are no obviously Serial strands of bloop and bleep in this music, but then there is enough of an abstract expressive autonomy to perhaps put off those committed to a past-leaning neo-Classicism or neo-Romanticism. This is chamber music that is ultra-serious about a commitment to hermetic purism. Like late Beethoven Quartets it does not try to speak plainly as much as it drives deeply into a sort of advanced expression that primarily is intended for the "real" cognoscenti.

So every work is a kind of highly worked gem that does not easily yield its riches but demands special attention. Slowly, as you listen repeatedly, the music emerges, even reluctantly. Yet if you spend the time with this music, you begin to reap the benefits. This is not stylistically astounding Modernism nor is it rear-garde hearkening back. It is everywhere. It is nowhere. It nearly demands the sort of intimacy that someone who learns to perform this music would have. Not quite all, but a reflective practical immersion. You need that. In today's world, does any of us have that much to give a composer who is already past and not yet certified as a member of the Holy Pantheon? That is your call. I decided to keep listening and by now I understand that this has substance and uncompromising originality.

So once again, here is something that does not play itself. YOU must be an active participant to the music in order for it to do its work. If you do that you will enter a world that you might not have available to you with any other composer. That is saying something, isn't it?