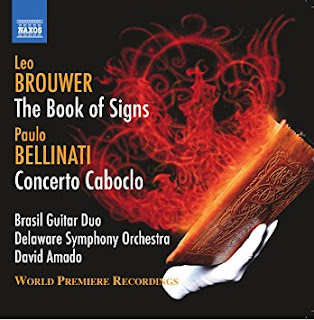 Here we have today a set of World Premiere Recordings by the Brasil Guitar Duo and the Delaware Symphony Orchestra under David Amado. It is one of those programs that hits one immediately and then continues to grow in stature for its most memorable lyric content and brilliant two-guitar passagework. Someone who has listened to as much music as I have over a lifetime might rightfully be expected to have become somewhat blase over the years about the possibility of engaging lyricism. In fact I have never lost the capacity for more and yet more of it.

And so the music today meets a very willing and enthusiastic recipient. What is it? It is two concerti for two guitars and orchestra, both written in the present century. The most remarkable is Leo Brouwer's "The Book of Signs for two guitars and string orchestra" (2003). It runs some 45 minutes and begins most notably and notefully with a long movement entitled "The Signs of Memory," a theme and variations that haunts and delights. The theme sounds a little like the famous  Francois Couperin theme in "Les Folies Francoises" which also made an appearance with Frescobaldi and others. The Brouwer is a kind of harmonically parallel ghosting and the variations are  extraordinarily inventive. Oh, but I find on reading the liners that the theme is in fact from Beethoven's "32 Variations in G minor," which in part explains why it seems so familiar to me, and yet too Beethoven then hearkens back too to the "Les Folies" theme, interestingly enough. From there comes the second movement "Variaciones sobre un tema sentimental" a ravishing theme that nearly compares with Rodrigo's "Aranjuez" for sheer tunefulness and grace. It has that suspended mystery like the Rodrigo movement and gets flawless execution and poignant variations by the two guitars and strings. The third movement does not let down and has some of the most fetching two guitar passages I can remember hearing. Well it is not surprising since Brouwer is probably the most important composer for the guitar in our lifetime. And this is one of his most remarkable and accessible works. So happy us, then? Me, anyway.

So how can one top that? One cannot really but then Paulo Bellinati does not try so much as he encapsulates and reworks the music of his Sao Paulo homeland with an intriguing "Concerto Caboclo for two guitars and orchestra" (2011). It is contentful and a treasure of beautiful guitar sounds with and without orchestra. It has some of that Brazilian saudade. And really it has its own lyrical strengths too, so it is very well suited as the companion piece to the Brouwer. It is quite worthwhile in its own right. If you love Villa-Lobos' take on the folk-Brazilian mode, and/or Milhaud's work in this vein, here is something more and not at all inferior, either.

In the end I find myself very happy indeed with this program and its execution. It is hard to imagine a more dedicated and capable two-guitar team for this coupling. The Brasil Guitar Duo have all the technique and all the sweeping lyrical sense to make their parts soar. And the Delaware Symphony under Amado do what they should and do it with spirit and beauty.

So I think anyone who wants to be conversant with Modern concerted guitar works would do very well with this brilliant offering. Even if you don't. This is a real beauty! Ravishing music that could become a soundtrack for your life right now. So I do tell you as a friend. Just get it.

Posted by Grego Applegate Edwards at 6:49 AM