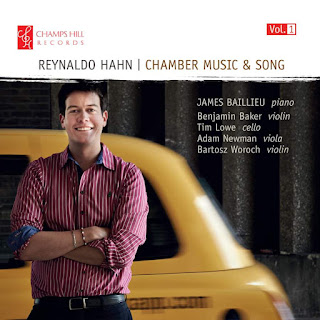 I've liked what little I have heard of the music of Reynaldo Hahn (1874-1947) so when a new volume offered itself to my perusal I happily responded. There aren't so many of his works available in recorded form these days, partially no doubt because he followed no particular Modern tendencies in his lifetime but instead stuck to his ultra-melodic pursuit of a kind of beauty that was put forward with utter conviction.

So we have before us the First Volume of what is entitled Chamber Music & Song (Champs Hill CHRCD139). This initial volume is all-instrumental, yet its relation to song is a factor in Hahn's  focus on wonderfully unwinding song-like melody, and in addition there are a number of song transcriptions that give us direct access into song form.

Performing throughout is pianist James Baillieu along with associates Benjamin Baker on violin, Tim Lowe, cello, Adam Newman, viola, plus Bartosz Woroch on violin. Four of five appear in Hahn's "Piano Quartet No. 3 in G Major" and all five join together on the "Piano Quintet in F-Sharp Minor." All four string players appear as soloists with Baillieu in succession on the remaining four duo works. Everyone sounds very well, near perfect for the music at hand, lyrical without straining with emotion, as these works no doubt should be performed.

The music program initially came out of a concert in the Brighton Festival devoted to the French muses, namely chamber works by Poulenc and Hahn. After a warm reception Baillieu and company decided to commit the Hahn works to recorded form. The happy results now spin in my player as I write.

Hahn does not fit some stereotype so well. Born in Caracas to a German-Jewish father, he moved to Paris with the family while young, was musically precocious, studied with Massenet, Gonoud and Saint-Saens and most notably was a composer of songs. He was a famed conductor of Mozart at Salzburg in his day. He was a good friend of Proust from 1894 on. This may be the stuff of legend but when you hear his music in depth it all comes together as not unrelated to his musical self. I won't pretend to explain that. Read all of Proust's masterwork, listen to all of his teachers, think a bit and maybe you'll hear as I hear. Yet even then those are not sufficient conditions for his art. There is his own originality that shines through. The music may be hard to imagine without the profound influence of his forebears and his milieu, but one feels at last that even without such things Hahn would have shined. What is most French no doubt is the heightened lyrical quality, in that in his own way very much a contemporary of Debussy's.

The Piano Quartet and Quintet are marvelously fertile inventions, perhaps as Classically Romantic as much as anything might be, but measured, original, melodically striking in their very own ways, with some of Mendelssohn's quirkiness yet something more than that. You must hear to understand. The miniatures that fall in between the larger works are lovely.

This music may be somewhat anathema for a stern Modernist. Yet it does not negate other music, so what could be the danger of hearing it, and perhaps even liking it, loving it, even? There is none in 2018, now that all the Modernist wars have been fought. We as music lovers are the victors, because now we might choose to listen to whatever we choose, and today the variety of styles and substyles are astonishingly rich.

So you well may want to make some space for these Reynaldo Hahn chamber works. If you should take to them like I did, you are a winner. If not, you lose nothing in the effort. If you embrace the whole of musico-historical possibilities, I cannot imagine you would not fall under the spell of the "Piano Quartet No. 3," then wonder at the 1946 completion date. Hahn may have been a man out of his time by then, but by no means out of ideas. I recommend you get this volume and apply your ears to its beauties. It will take you out of this time, no doubt, to some Hahn Wonderland where nothing matters save the musical beauty he conjures for us so well. Listen soon and feel a happy elation of surprise.


Posted by Grego Applegate Edwards at 7:22 AM