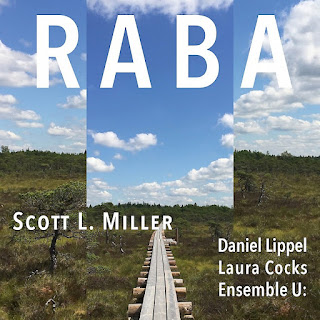 I have increasingly found Scott L. Miller to be his own musical voice in the realm of Electronic and New Music. Going through various blog indexes I find this to be in fact the third CD of his that I have reviewed on these pages and the pages of Gapplegate Music Review. He shows no sign of flagging on RABA (New Focus Recording FCR 198). In fact this well may be his most important offering to date.

What started out for Miller as a kind of mini-retrospective of his 20-year cycle of creation rather quickly became a kind of reworking of past efforts into new effusions and novel collaborations. It is a collection of some seven works created over a significant time span (one from 1998, the others completed in their present form in 2016-7). Each occupies a particular niche in the ambient zone. There are some three for "fixed media electronic sound" alone: "Autumn Etude" (1998), "Hilltop at Montalvo" (2017), and "Solstice Orrery" (2016); one for Ensemble U: (alto flute, clarinet, violin, cellos, tam tam, piano) and electronic sound, "Raba" (2015/2017); two for Daniel Lippel on electric guitar and electronic sound or interactive electronic sound, "Admiration" (2008/2017), "Meditation" (2016); and one for electronic sound, Daniel on guitar plus Laura Cocks on flute and electronic sound, "The Frost Performs Its Secret Ministry" (2016).

The most striking thing perhaps in these compositions as a whole and in general is the acute sense of a vibrant sonority-timbre design that puts each work in a special place and creates memorable ambiances that feel rather organic, naturally growing and permuting. The works that interface conventional instruments and electronics have close overlaps in timbre between the two classes of sounds so that a sort of orchestral luminosity in furthered. And what completes it all is the sort of musico-logic of the sequence of each work. There is not quite a feeling of inevitability so much as there is a kind of "rightness" to the unfolding in time. The liner notes mention his tendency towards something called "granular synthesis," or in other words the breaking up of a sonic signal into grains of sound that each contain some of the audio modeling of the original. One might profitably trace some of the feeling of audio-logic to this process.

One might quibble as to whether Scott L. Miller's music belongs in the New Music category. To me such quibbles are plainly wrong-headed. An electric guitar, for example, is a contemporary instrument like, say, the pianoforte was during its first advent. It is transcendent by now of stylistic pigeonholes. And if ambiance can be found across a spectrum of various stylistic avenues, it is not to say that it does not belong as one of the characteristic modes  available to New Music artists today.

What especially matters is that Scott L. Miller excels as an artist in this mode. He is one of the very best active today and one of the most original and consistently satisfying. The program is in many ways a bellwether of New Music-Electronic Music right now. I enthusiastically recommend it to you.
Posted by Grego Applegate Edwards at 6:56 AM