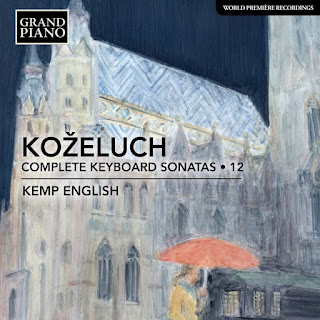 As the liner notes to the current volume state, Leopold Kozeluch (1747-1818) was a contemporary of Mozart and during his days in Vienna was thought by many to be a better composer! And yet only now with a valiant undertaking of the World Premier Recordings of his Complete Keyboard Sonatas (This being the 12th and final volume) (Grand Piano GP736), Kemp English introduces these some 50 works to our world.

Why has it taken so long? Kozeluch was born outside of Prague in 1747 and moved to Vienna by 1780. By then the pianoforte had all but replaced the harpsichord as the fulcrum point of a musical home and Kozeluch's sonatas gave the amateur a lot of possible choices. The music in this volume includes an early example, perhaps a little CPE Bach-like, and a later, more-or-less pre-Beethovenian proto-Romantic sonata. I am happy to say that Sonatas 47-50 are fascinating glimpses into a vital creative mind.

Kemp English performs all on beautiful period instruments. He sounds inspired and I cannot fault his performances in the least. The complete set was made possible in many ways by Christopher Hogwood's welcome editing of a complete Barenreiter Edition that has been published recently.

The liners give us valuable historical background, including an assertion that his centrality for keyboard sonatas and his personal vision in fact enabled him to effect a major revolution in the music circles of the time.  Consider this quote from a 1796 Schonfeld  publication:  "The vogue of the pianoforte is due to [Kozeluch]. The monotony and muddled sound of the harpsichord could not accommodate the clarity, the delicacy, the light and shade he demanded in music; he therefore took no students who did not want to understand the fortepiano as well, and it seems that he has no small share in the reformation of taste in keyboard music."

That is a rather bold assertion to us perhaps, since we have basically known next to nothing of the piano music in our lifetime. However a close listen to this 12th volume bears out the assertion, or at least does nothing to contradict it. Kozeluch surely has a real talent and a feeling for the piano that rivals the best of his contemporaries.

If we do not hear the emotional strength and depth of Beethoven or the sublimity of Mozart or the melodically soaring qualities of Schubert, there is something else to be appreciated that makes a journey into this volume worthwhile. There is a kind of crisp logic, an inevitability to the unfolding sequences.

Anyone who loves the Classical-Early Romantic period of the Viennese flourishing will retrieve an important lost piece of the scene then with this Kozeluch set. Volume 12 satisfies on its own, but if you are a completest you may want to explore the rest as well. Brilliant addition! Definitely recommended.
Posted by Grego Applegate Edwards at 7:12 AM