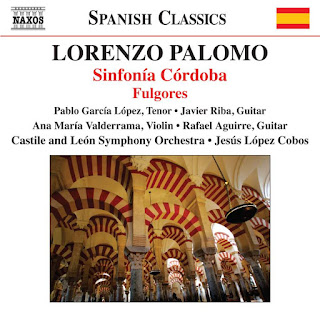 The Contemporary living Spanish Composer Lorenzo Palomo (b. 1938) is previously unfamiliar to me. All that has changed since I have been listening to his CD recording of Sinfonia Cordoba and Fulgores (Naxos 8.573326).

These two symphonic examples from 2015 and 2011, respectively, give us a splendid view onto Palomo's mature style. The liners make mention of Palomo as the stylistic successor to Joaquin Turina--especially in terms of the "rhapsodic freedom" that they share. In a broader sense Palomo represents all Spanish folk-tinged classical forebears since DeFalla and adds something of his own original musical personality to it.

"Sinfonia Cordoba" is a sort of musical travelogue, a portrait of an old city in three movements. "Stroll to the mosque-cathedral" begins with mystery and segues to a beautiful moment for tenor Pablo Garcia Lopez and orchestra. "Nocturne on the river bank" and "Courtyards in the month of May" continue the rhapsodic Spanish-tonality-drenched whirly-gig of impressions. And somehow one can feel that late springtime diffuses something in this music.

"Fulgores" is a dancing sort of folkish atmosphere that features to good advantage Rafael Aguirre on guitar and Ana Maria Valderrama on violin.

It all is a good example of well-wrought, well-orchestrated Spanishiana if you will pardon the awkward coinage. Those who do not embrace the rich legacy of Spanish sounds may not find this especially interesting. Yet if that is the case I suppose such a person would have no interest in following the Spanish classical heritage at all, so that would be rather obvious.

I find this music did not reach out to me on the first number of listens. Then, pretty late in the game I started to respond to its rather profound indifference to generating applause, its definite "this is the music as it needs to be" approach. In the end I like it and I hear a sort of poetic, Spanish Impressionist strain that is about the echo of substance and light more than an immediate presence. So in the end I recommend it. But you will need to spend some time with this music before it speaks to you, if you are anything like me.
Posted by Grego Applegate Edwards at 6:58 AM