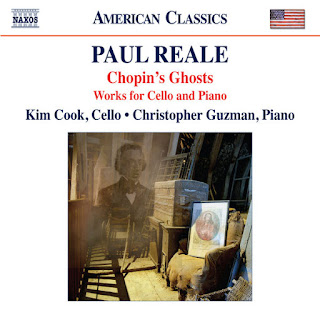 Contemporary American composer Paul Reale has not gotten a lot of attention on this blog. The lack is remedied today with a volume of chamber music for cello and piano, Chopin's Ghosts (Naxos 8.559820). Performances are in the very capable hands of Kim Cook, cello, and Christopher Guzman, piano. They are melifluent and balanced in expression, neither facile nor counter-phlegmatic, rather occupying a kind of ideal middle ground that allows this music's Modernist core to mingle freely and adeptly with the music's Neo-Classical balance and Neo-Romantic expression.

The music on this program is quite recent (or recently revised), all but one (Wexford Carol, 2004) hailing from our current decade. The solo cello "Seance" (1973-74, rev. 2017) spells the program nicely as a short and worthy break from the cello-piano configuration, the latter of which is otherwise predominant.

And for that there is much to appreciate. There is substantial invention and complexity so that lovers of the cello-piano magic of the past can live the experience again with enough change that there is no question of repetition. It takes some close listens, many more than one, and then the music truly beings to speak.

"Durch die Jahreszeiten II" (2013) sets the stage for what is to come with finely wrought folk in radical transformation. The centerpiece works "Chopin's Ghost (Cello Sonata No. 2)" (2017) and "Cello Sonata No. 1" (1983, rev. 2017) make use of "found material" to give us a Modern drama of old in flux and transport. So the first makes use of the old "What Can You Do with a Drunken Sailor" while No. 2 alludes in transformed obliqueness to the music of Chopin. It is the complex node of reworking that affords us substantial fare, a kind of set of memory objects that show by the passage of time how there can never be a continuous sameness if there is to be an ongoing contemporary music world.

Those who rise to new cello-piano repertoire played well I warrant will find this absorbing and rewarding. And those who appreciate well-thought-out, Modern "Neo-" will much appreciate it as well, I would think.
Posted by Grego Applegate Edwards at 7:22 AM