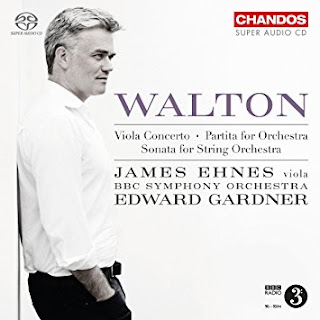 William Walton (1902-1983) is one of those twentieth century composers whose reputation has fluctuated somewhat, at least here in the States in my lifetime. I am thinking in terms of a comparison. There was perhaps a time where William Walton and Ralph Vaughan Williams were spoken of nearly in the same breath as principal architects of the arrival of the English Classical Renaissance in Modern times. Then as I experienced it in the later '60s, Vaughan Williams seemed to steadily rise in importance as the compositions of the last years were gradually assimilated and appreciated. And then what of Walton? He remains a highly appreciated figure, but perhaps not a true member of the invisible pantheon of immortals? In the end the horserace for immortality seems unimportant.

All this is a prelude to a new release of merit surrounding some of Walton's more interesting works, namely Concerto for Viola and Orchestra, Sonata for String Orchestra, and Partita for Orchestra, as presented to us anew by violist James Ehnes and the BBC Symphony Orchestra under conductor Edward Gardner (Chandos CHSA5210).

What strikes me about the program is the juxtaposition of three of Walton's more ambitious orchestral scores that in some ways are due for more attention that they have received in my own experience at least.  The readings are sympathetic and enthusiastically etched out with a wealth of sonic detail. These show a very earthy Walton, honest and painstaking, not bent on barnstorming innovations or even a thoroughgoing Modernism. He was in some ways unassuming, a composer who delighted in sounding out of a tradition that was adjusted and updated to the world he lived in and so in no way an anachronism. Yet as ever there is an unpretentious directness that seems now refreshing.

The combination of sterling sound, dedicated stylistic trueness and a mix of three very worthy compositions leaves me with a feeling of satisfaction. Any follower of Modern English developments in the 20th Century would find these readings illuminating and very pleasurable. If I still cannot seem to get a real bead on the whole of Walton and a single vision of how to encompass this, it is not the fault of this program. Recommended.

Posted by Grego Applegate Edwards at 7:01 AM