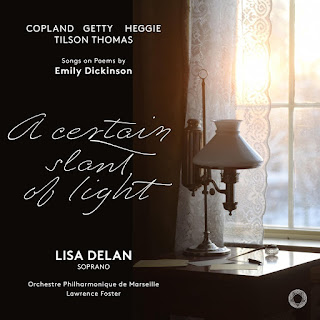 To gather together multiple Contemporary Modern song cycles for soprano and orchestra based on the poetry of Emily Dickinson seemed like a good idea when I heard of it, and so I requested a copy. I have now spent some time absorbing it and shall report on this morning to you. A certain slant of light: Songs on Poems by Emily Dickinson (Pentatone PTC 5186 654) is the full title. Soprano Lisa Delan holds forth dramatically with the Orchestra Philharmonique de Marseille under Lawrence Foster sounding nicely detailed and poised in a program of cycles by Aaron Copland, Jake Heggie, Gordon Getty, and Michael Tilson Thomas.

The stage is set historically and stylistically by Copland's celebrated cycle "Eight Poems of Emily Dickinson" (1948/1950). It is music familiar to many, myself included, and it functions in some ways as a template for an evocatively descriptive and Expressionistic-Modern-quasi-Impressionistic pallet of colors to heighten the soprano's textual through-composed presence throughout.

The sort of descriptive-Modern-Leider approach is continued and extended in the song cycles that follow. Jake Heggie's "Newer Every Day" (2014), Gordon Getty's "Four Dickinson Songs" (2008) and Michael Tilson Thomas's "Poems of Emily Dickinson, selections" (2001) all offer some genuinely moving music and a sort of continuous Dickinsonion dramatic theatre of text and tone. Of all these Modern extensions on Dickinsonia the Tillson Thomas stands out as being especially interesting and original, yet in the end all of this music is worthwhile.

Delan and the Orchestre Philharmonic de Marseille are in top form. They exemplify how to approach this music, not so much as an extension of operatic gestures as a thoroughly liederian approach, dramatic yet introspectively expressive.

And so I do not hesitate to recommend this to you, for the performances, for the Copland and the Tilson Thomas especially but for the Heggie and Getty as well.