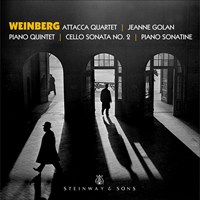 When it comes to discovering composer Mieczyslaw Weinberg (1919-1996), it seems that each new release reveals more and more of his musical personality. That is certainly so with a new program of his chamber works, Piano Quintet, Cello Sonata No. 2, Piano Sonatine (Steinway & Sons 30072).

The three works cover something of the early years of his Russian exile from his native Poland and drop into his musical mind in several succeeding years, 1944, 1951, 1958.

The "Piano Quintet, Op. 18" (1944) has a molto expressivo demeanor that contrasts vividly in each movement, from the strangely hushed opening movement with its mysterious theme stated in the piano in octaves, we find ourselves in a sort of sarcastic waltz environment and then on in the final movement to an almost brutal thematic tattoo that quickly gives way to a complicated ethnically bursting forward dance motif and even an illusion to my ears to a boogie woogie pattern. It is characteristic of the very unexpected charms of the music's unfolding.

These were turbulent times for Weinberg and the music reflects anxiety, restlessness and onward momentum in ways very Modern and idiomatically Weinbergian. It is characteristic of Weinberg's Modernism that he not allow his opening theme to show much in repetition but instead to flow through without an obvious resting point. That never-resting quality in a way models the manic ever-active state of the modern megalopolis, or we certainly can experience it that way now even if he might have intended something else when he wrote it.

On the other hand the Piano Sonatine (1951) has a deceptive lightness that in paradoxical Weinbergian fashion turns out to be not "easy" but somewhat recalcitrant? It contrasts well with the Quintet and reminds us that Weinberg was not monolithic in any sense.

Finally the 1958 Cello Sonata No. 2 seems very much in line with the Russian Modernism in the air via Weinberg's friend and mentor Shostakovich yet also shows a subtle Jewish element and an additional Weinbergian element that sets it apart. The symbiotic relationship of Weinberg and Shostakovich was not necessarily all in the direction of the latter to the former, as we can read of in some of Shostakovich's later statements on the relationship.

As far as the performing artists involved, pianist Jeanne Golan sounds poised and committed as does the Attacca Quartet and cellist Andrew Vee. The scores call for a thorough grasp of Weinberg's highly individual window on music. Happily all five do very much get it and get into it.

For all these reasons this is a most attractive volume that will by its content get open up new territory for anyone interested in Weinberg's overall opus. It also could serve as a perfectly revealing introduction to the composer. So I do not hesitate to recommend.