Alejandro Tonatiuh Hernandez, Tempus Viellatorum, Fiddle in the Music of the XIII Century 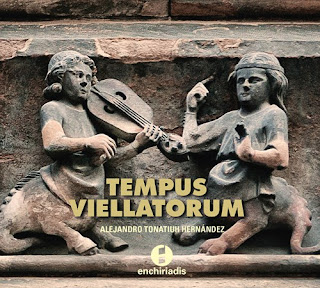 When the ears might grow weary of a continual onslaught of a same style, period, or genre, there are surely other things to turn to. For me Early Music provides such relief. Given the creative and more exacting reconstructions characteristic of  Early Music performance practices that began more or less in the '70s of last century it can be exciting to hear what is being done today.

A nice example of that is to be found in the recent title Tempus Viellatorum: Fiddle in the Music of the XIII Century (Enchiriadis EN2047). It features oval medieval fiddles as played by Alejandro Tonatiuh Hernandez. He plays fiddles with or without a lateral drone, with several different bows as reconstructed from the period. Joining him are several Early Music dedicated instrumentalists playing the citole, a Medieval lute, the muse, a bagpipe, a frame drum without jingles played in the manner of Persian traditional music, a tambourine and wooden clappers.

The music affirms the drone-fiddle roots we think of when we think "fiddle." Melodies wind around themselves in a sort of Early Music ethnicity. Troubador/Trouvere melodies arranged for fiddle bump up against Conductus refrains, things that suggest the dance, things that contemplate--and some 800 years after we have a chance to hear them again nicely played. It gives me goose bumps to be on an intersection to this time, to these sounds. It is a most rare opportunity when you think about it. Of all the things missing now these works have survived.

They affirm in the best of new period performance practices that it in the end it should feel less like a reconstruction and the more like a living breathing music to us, for us, in us like all ancient things somehow must if we give them a chance. And for that it matters slightly less when listening if everything we hear is exactly how, to the last quaver, someone at some time might have played it. We do not know everything there is to know with total exactitude. Good performances like these convince that there was such a thing as a relaxed, somewhat loose and less a hugely prescriptive way to play the music and like all older music it survives as how people of our time imagine it, right? These are many reasons to appreciate the new performance practices as authentic in spirit. And so we smile as we hear this. So I do.

Yes, as one of my very influential teachers once asked, "but ALL music is ethnic music, isn't it?" Sure. It is. And no one of us is not without some "eth"! That is not to say that we should weaponize it, for we all ultimately came from the same cradle. We are in the end one humanity. We can partake of ethnicity of any branch and know that in the end it is one tree. Or so I would suggest.

Nonetheless when you hear this music performed in this way you cannot help but affirm that Medieval Europeans like all of us anywhere or at any time have distinctive cultural predilections and face it, if there is a debate about rising to some music, we should rise to all worthy music not just the parochial and the local. Or we alternately can take the knee and no disrespect is intended. We benefit when we have freedom and choice, to play a music or not, to rise to it or not to rise, to bring something to the rest of us about what we feel is wrong, or what we feel is right to do. And what music IS, it is not for any one person to prescribe. Freedom is freedom to choose what we furnish our lives with. And how it means something special to us.

I do not mean to get topical, but it does occur to me that WE have the choice as freely human to define what music should do for us, not some "authority." And if you should get a hold of this music and listen intently, no one should tell you how you must respond to it. The response should be honest and measured by what feelings the music invokes in us, in the time in which we live.

Along those lines this album if you listen repeatedly gets increasingly singular. Thematic treatment is more folkish than scholarly, less mannered than plainly ornate, so to say. Anyone who seeks out New Music comes full circle by respecting equally Old Music, for in its own way as performed as we tend to today it is as new as it is perennial and eternal. Alejandro Tonatiuh Hernandez gives us focused and brilliantly concentric readings of this music. You should hear it. So too, your children should hear it. Your love ones should hear it. Your friends should hear it. There is nobody that should not hear it. We may travel through time in a straight line, or at least many of us think we do. Yet spirals and recurrences have an important place in gauging who we have become. So listen, then. I recommend you do.