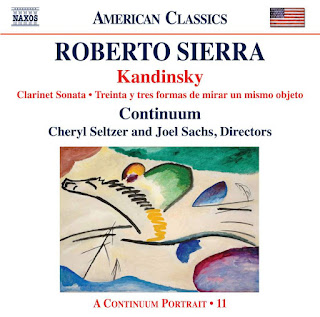 There are albums that to me are exactly as one might hope, though maybe exactly not what you already know of course. And so with the offering today. Roberto Sierra has ever been to me a composer that being very much himself epitomizes something very good about the music of today. So we get that on the recent CD Kandinsky (Naxos 8.559849). The contemporary chamber gathering Continuum is in charge of the performances, with Directors Cheryl Seltzer and Joel Sach sharing the piano duties, ever amazingly and fittingly I might add. Everyone involved has concentrated and applied their considerable interpretive skills to make these performances a remarkable thing, to set off Sierra's music in as nearly ideal a manner as we might ever hear.

And as to the works themselves, all come from the first decade of this century. Two of three are in World Premier Recordings and all are vital and moving High Modernist beauties that in many ways are less a total abstraction so much as abstracted-yet-concrete embodiments of Sierra's fertile imagination.

Sierra, many will know, hails from Puerto Rico. There are Carribean strains in his work and you will hear them on this program. It is an important aspect much of the time but I will at times leave it to you to pick up on them. He integrates those elements fully and nicely, as well as anybody ever has and that is saying a great deal.

The title work, "Kandinsky" for violin, viola, cello and piano (2003) pays homage to the breakthrough abstract artist Wassily Kandinsky and his work. The music as one might expect has a High Modernist abstracted quality. It is music of a demanding sort for the players, who must shift into various expressionist modes continually yet always in a sort of multi-linear, unified presentive way.

The Latin strain is excitingly present in the "Sonata for Clarinet and Piano" (2005--06) via a gloriously dance like Salsa opening movement that is followed by a sort of explosive expansion of the rhythmic cells and melodic-harmonic implications of the beginning. This is spectacular music for sure.

Then we hear Seltzer and Sachs explode forward on their own in their performance of the piano four-hands "Thirty-Three Ways to Look at the Same Object" (2005-08). It is a glorious tilt at the windmills of our minds and the windmills lose!

There you have it. I cannot recommend this more strongly to those who cherish a Modernist flourish that is on the edge of tomorrow yet lets us know where some of the roots lie! Finely crafted brilliance played remarkably well. So get it. It is Naxos inexpensive and worth every single penny by far.  Sierra is a treasure.


Posted by Grego Applegate Edwards at 7:31 AM