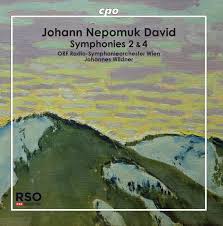 Bruckner is not dead. He lives on. And if you wonder what kind of symphonies he might have written had he lived in the '30s and '40s of last century, you might listen to the music of Johann Nepomuk David (1899-1975), specifically in this case today, David's Symphonies 2 & 4 (RSO 777-577-2). Now it is probably unfair of me to state  glibly that David is Bruckner. He isn't. He is David. In the two symphonies so nicely performed by the Radio-Symphonieorchester Wien under Johannes Wildner, there is very much something "beyond" Bruckner there. The chromaticism is pretty well at the edge of the tonally centered and there is a dynamic tumult to the music that is more extreme than Bruckner might have felt comfortable with. David is no clone. Far from it. He is a Modernist as much as there is something Late Romantic or Neo-Romantic about the music.

So David was born in Austria. He was blessed with a fine singing voice and at ten was sent for musical training to become a choir member. He studied with choirmaster Muller, who venerated Bruckner. Fast forward to 1923, when David premiered his first symphony. By then Vienna had cast its spell upon the young composer. Schoenberg and other luminaries were duly influential. By 1922 he himself noted the strong influence in his style of Reger in the contrapuntal sphere, then also Scriabin and Debussy. The monothematic symphony idea began to consume him but also so did Schoenberg's 12-tone techniques. By the time of 1938 his second symphony took stock of his evolution. It was a large-scale, 40-minute orchestral work for a sizeable gathering of instrumentalists. There are three themes and the development is contrapuntal.

Listening is a matter of immersion,. There is a striking density and drama to the symphony and the more you hear the better it becomes.

Symphony No. 4 is a product of struggle in a world torn and  ripped in twain by the Second World War. The original manuscript of the work was destroyed in an air raid and David had to reconstruct it all from memory. One might readily say that the final version shows the scars of its traumatic birth in that it has upheaval yet a determined grandeur and even a contrapuntal strain of thickly grim austerity at times yet a depth of feeling too that catapults it into our times as a reminder of how unsettled and ugly the world can be. There is a transfixing quality to the whole that gradually enters your listening mind and holds pride of place, at least for me.

I am heartened by the depth of this music. David seems very much a discovery for us that is as worthy as any revival discovery from this era. The music is rather profound. If the kind of angst of later Allan Pettersson appeals to you, then David may well strike a sympathetic reverberation. I myself am glad to have and hear this disk and will no doubt try and hear more of his music going forward. David is a real find.