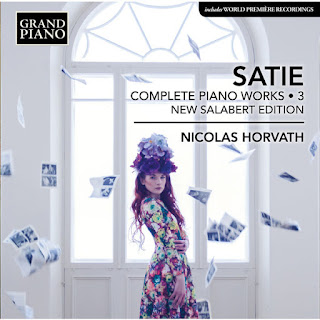 There are a number of reasons why the lover of the Satie solo piano opus finds the experience of repeated listenings a virtually unparalleled joy. The most obvious one has to do with the sensuous untrammeled lyrical beauty of something like the Gymnopedies. Even the casual TV watcher might be exposed to that in, say, a coffee commercial that features the most well-known one. And so perhaps many people know of this, though they may not all attach the melodics to the Satie name.

And then there is the whimsical side, the structurally wayward side, and other sides that this review article need not address, particularly as I have not thought it through to a point where I might cover every wrinkle.

Yet there is one side not yet mentioned that is especially important to the review today, namely his processional  pensativities. They are quirkily modern, far from facilely intuitional in terms of a listener's ready grasp. One nice aspect of the Satie Complete Piano Works 3, New Salabert Edition (Grand Piano 763) is that a solid block of "processional" Satie is taken together as a whole by pianist Nicolas Horvath.The block begins with "Preludes du Nazareen" and ends with "Prelude de 'La Porte Heroique du Ceil'" It occupies some 64 of the generous 84 minute playing time. Then flows a somewhat more rapid tempo series of musings beginning with the "Gnossienne No. 6" and ending with "Danse de Travers II." It is a satisfying sequence, a sort of unified summing up of two very Satian approaches to harmonic-melodic sequencing, the unexpected twists and turns in a music far from following the expectations of periodic symmetry that might have been assumed in the piano music of his time, or much of it at least. Interestingly the potentially marathon "Vexations" is placed within this block of music, clocking in at a mere seven minutes, and so it appears to us not as the day-long bizarre mesmerisation it can have when following faithfully Satie's suggestion to play it again and again. For that one can turn to other performances. Here it takes its place with other slow moving, winding processionals.

The entire projected complete Horvath reading of Satie solo piano music began when he approached Satie musicologist Robert Orledge and asked him whether he might serve as Horvath's artistic adviser on a proposed complete reading. As it happened Orledge was at nearly the same time asked to edit the complete opus for a proposed Salabert Edition of the music. A number of errors had  crept into the published versions of the works, some in part due to a slightly lax proofreading job on the part of the composer. Orledge was to correct these misprints by referring to the original manuscript versions. He also perforce was charged to cull through early versions of some works, alternate readings, fragmented,  partial works, student works and such things as piano accompaniments to songs both his and of others. From all that Orledge was to cull a kind of definitive performing edition of as complete an opus as seemed desirable given these variabilities.

In the course of this third volume we are treated to one World Premier recording of the previously unheard 30 second fragment "Airs a Faire Fuir No 2 (version plus chromatiques)." A sizeable number of revised-corrected pieces also occur here for the first time.  Namely of the "Prelude du Nazareen," "uspud," "Dances Gothiques,""Prelude de 'La Porte Heroique du Ciel,'" "Sans Titre, ?Gnossienne," "Pieces Froides, Airs A Faire Fuir" and the Froides "Danses de Travers," and finally the "Danses de Travers II."

I have not done A-B comparisons on the revised works, but certainly nothing seems amiss. Neither though did I find myself in a drop-drawers state of astonishment. We do not always need that to be pleased in any event.

As for the Horvath readings, there is a great deal of limpidity and lyrical, non-virtuoso poeticism called for in much of the music. Horvath perhaps is not entirely perfect at times, yet his performances have a touching freshness and lack of pretense that seem to me nicely hewing to the spirit of these works. In that way perhaps you hear the Satie a little bit more than you hear the pianist, which is in no way a bad thing. Horvath is pretty selfless throughout.

The Satie pieces on this volume alternately haunt and beguile, and sometimes both. If you do not know the solo Satie, and if so where have you been? Seriously though if you have not delved deeply into the brilliant complete opus, this volume will give you a big leg up if you remind yourself to pay attention and not let yourself wander away into the thickets. The New Edition samplers might want to start with this volume as well. And for the Horvath performances, he is authoritative in choice of tempos and amount of rubato, though others have done perhaps more at times by taking liberties. Still, this is a welcome addition to the librares of all Satie acolytes and champions.
Posted by Grego Applegate Edwards at 7:42 AM