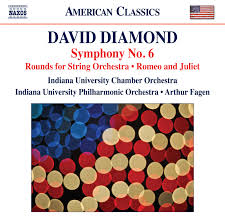 There is a tendency to pay less attention recently to some of the US composers once quite popular in the '30s to '50s. Like Thomas Hart Benton in the painting world, their style was thought the epitome of Contemporary when they flourished, and then their reputations underwent a bit of an eclipse. Like Benton many are due for reappreciation.

Take David Diamond (1915-2005). He was overshadowed for a time as later styles came to the forefront on the American scene. Yet there is a master craftsman at work on the wealth of his compositions, an inspired originality that now sounds again fresh. So Naxos in its ongoing "American Classics" series gives us a volume that reminds us how much we miss if we ignore the Diamond orchestral legacy. Here we have the Indiana University Chamber and Philharmonic Orchestras under Arthur Fagen with enthusiastic and vibrant readings of three middle period gems, namely his Symphony No. 6, Rounds for String Orchestra, and Romeo and Juliet (Naxos 8.5598942).

One notes from the first the quality of the performances and the concentric intensity of the music. Arthur Fagen and the Indiana bring the scores to life with fine nuance and bold strokes. And each work is in its own way exemplary and a world unto itself.

The opening "Rounds for String Orchestra" (1944) has vivid plein air energy in the outer movements and an "Appalachian Springish" tenderness in the center. It seems vaguely Americana-like yet there are no obvious thematic homespun allusions exactly. It is a delight, really.

"Music from Shakespeare's Romeo and Juliet" (1947) alternates drama and reverie and a lyrical then more robust sinew, a rustic charm not exactly typical of what the timeless story might evoke. The "Death of Romeo and Juliet" finale morns, regrets and shows a tender sadness.

And then we turn to the concluding "Symphony No. 6" (1951-54). This beginning of a '50s view of what is to be done has a bolder thrust than the previous works, really more thoroughly modernistic and expressive of an inner strength that takes us unawares then affirms Diamond's brilliance. Hard to believe but this is the World Premiere Recording. And a fine thing it is.

There you have it. The weather can be fine if you want to stretch your imagination with these three nicely done offering. Put them on and forget the thunderclouds.

Posted by Grego Applegate Edwards at 9:26 AM