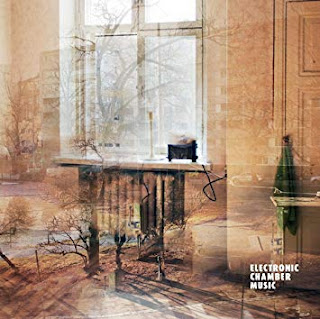 To show you how much New Music has evolved or simply changed, please suppose you bought an album entitled simply "Electronic Chamber Music" in 1963. What might you imagine you would get? I am thinking something along the lines of MEV or AMM, improvised, abstract, somewhat hermetic. On the other hand the 2018 Electronic Chamber Music  (SIBA Records Sibelius Academy), might be that but might be something else, or both. Perhaps the tip-off is that no composers are a part of the cover listings. That is deliberate. This is music no doubt pre-planned in many ways, yet at base improvisational. In that we have a situation in common with our hypothetical 1963 album by MEV or AMM.

What is meant by "Live Electronics" is one thing that may well differ today. In earlier days such as 1963 synthesizers were bulky and cumbersome, not really the sort of thing you'd expect in a live ensemble. Until the later sixties as the evolution of relatively compact synthesizers came about an ensemble like Mother Mallard (who amassed a number of synthesizers in live performance) would have been inconceivable. Now of course that is not so. But then individual pitch producing and pitch altering devices were likely to be there in the earlier days, individual components that later were part of the synthesizer anatomy. I mean tone generators, wave generators, frequency and amplitude, timbre and taxonomic sound alteration filter devices and such were a likely part of a live ensemble. You were perhaps less likely back then to encounter a gathering of unabashedly acoustic instruments like the acoustic guitar or the unprepared contrabass etc. Nowadays it is different.

And the music back then might have been improvised but it tended to sound something like the punktive Serial New Music one might hear coming off the composer's pencil directly then. The music might also bear some relation to the sound laboratory studio electronic musics then being made, especially in terms of a living impossibility sort of thing, music that was for whatever reason far more nearly impossible to produce on conventional instruments alone. This because of complexity, speed, timbre, etc. Virtually or literally unplayable music was often the case--doing something with electronics even if improsed and live that was unimaginable before electronic  generation and alteration.

In the case of the 2018 release Electronic Chamber Music we can get some enlightenment on at least one way such music can vary from what was common 50 or so years ago. The group in question is a quartet and Finland is their home base. This is a music of collective composition, improvisation surely. And group structuring. The participants are Otso Lahdeoja on guitar and electronics, Alejandro Montes de Oca is responsible for modular synthesizer sounds, Aino Eerola plays 4- and 5-string violins and electronics, and Nathan Riki Thomson plays prepared double bass and electronics. Musicianship is not lacking and all four make a significant impact as a quartet.

The music is tonal centered and often as not pulsating. It is mostly tonal music and  both extended techniques and electronic enhancement take the acoustic instruments and make of them something familiar yet novel. There is a soundscaperd ambience to this music that in 1963 would have sounded quite different of course. Gone are bleep-bloop hochet and to stay are extended outburst of cosmic differences as joined by somewhat unprecedented soundings of long notes and then loping sing-sing continuity.

It is music that few would find in any way jarring, a kind of peon to open space more than a sawing through to essential primality that perhaps might have prevailed in such things in 1963! And indeed one can scarce imagine this music without the psychedelic and ambient worlds that 1963 knew little to nothing of. Yet the intervening avant jazz and improv styles show little impact. That is not to say that anything should or should not prevail today; I only wish to identify more precisely what one would hear on listening.

I find it all fascinating and nicely open. This is not necessarily music to change the face of our art for many years to come. Face it, everything need not be that. It is music of depth and substance, good to commune with at length. I do recommend this one.


Posted by Grego Applegate Edwards at 7:45 AM