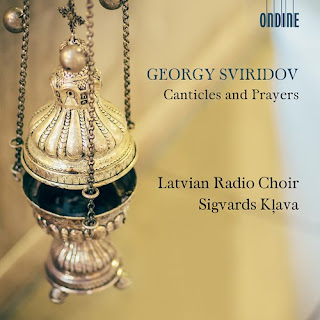 Since to my knowledge none of us have sprung fully formed from the head of Zeus as apparently had Athena according to legend, we must in the beginning have more or less absolute ignorance when it comes to anything, and that includes music. Sure we may have an aptitude for it and even as a tabula rasa being take readily to its intricacies, and so too at some point we may like some things and perhaps others not as much. But all that entails a long gestation period of gradual and cumulative understanding, of slowly developing a musical understanding of the universe of various styles. That is, of course if one is so fortunate to have music available to experience in  life.

As as for the Modern, the New Music as it has unfolded from the beginnings in say 1900 and forward 118 years to today, the more of it one can hear the better one might understand the whole of it. For example there is the music of Georgy Sviridov (1915-1998), as one might hear in  the recent and fascinating Canticles and Prayers (Ondine 1322-2).

Now I'll admit I am, or rather was in total ignorance some years ago about Sviridov and his music. I have had the chance happily to hear some of it and if you want to know about that type his name into the search box at the upper left. The present volume up today gives me and (perhaps you) a good idea of and a rewarding leg up on his sacrally oriented choral music.

Sviridov grew up in the Orthodox fold in Russia and was profoundly influenced by the music of the Orthodox Church. The cycle "Canticles and Prayers" for unaccompanied choir is it seems Sviridov's definitive and final work  in the choral mode. It also was his last completed composition, as it involved a long development from 1980 to 1997, the year before his death.

The plan was to cull all the sacred choral sketches he had begun but not completed by 1990 or so, to amass and develop them into one rather huge oratorio. By 1997 Sviridov had completed five parts, but did not live to finish the whole of what he had envisioned. The current performance takes on four of the five sections, omitting the second part and several movements from part five. The program concludes with a related  "Red Easter," which was completed in 1978.

In all this Sviridov utilizes Russian Orthodox liturgical texts but does not set them in an order that could constitute a set of chants the could be utilized as a whole in an Orthodox service.. He builds up the haunting whole as a sort of lament for the impending demise of the Russia of the Soviet Union, which was indeed undergoing a terminal dissolution in the last decade of Sviridov's time on earth.

This is introspective, mostly very somber music. It is music somewhat difficult for a typical choir to perform, as it makes demands, calls for in the words of the liner notes a group of "exceptional mastery and vocal abilities." I must say that the Latvia Radio Choir as heard on this disk is in every way up for the challenge of the music. The results are most ravishing, sublimely beautiful.

This is music that expressively expands outward from Russian Orthodox Chant. It is Chant as much as Afterchant, if you will pardon the phrase. It has a modern foundation with harmonies a bit more tangy at times than what would be typical in the church music. It is meditative and feelingful.

It is robust and yet there is a fragility as well, a kind of presence of the feeling of loss, as might naturally be expected given the composer's intention.

For all that it constitutes a kind of Modern milestone in the Russian choral world. Not at all avant garde in obvious ways, it is nonetheless substantial and original in outlook. It is so profoundly of its time that we can already look back upon it and feel the distance the world has gone since the end of last century. Of course we understand that not all change is wholly good, and what that entails we can only review the events that have transpired in the period once thought of as an age "beyond history," those years from the advent of the Millennium to the right now is a period of true upheaval in the world, an upheaval that compounds other upheavals and sediments a depth of change, a stratigraphy it may take future historians to make sense of, since the world does not especially make sense in all ways at present. Sviridov captures a kind of awareness of inevitable change and a less than happy feeling of what it might portend. That is complex and I try to experience it all as expression at this point. Well that perhaps defines this postmodern age? It is music of Postmodernity-Modernity surely. And sublimely so. Like Arvo Part, Sviridov has his own take on the old-in-the-new. The music haunts.

Posted by Grego Applegate Edwards at 11:18 AM