The Crossing, If There Were Water, Music of Stratis Minakakis and Gregory W. Brown, Donald Nally 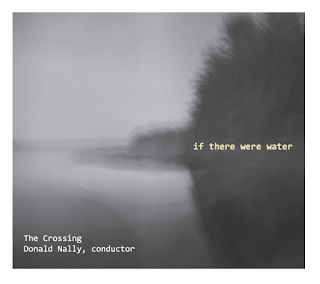 The Crossing is to my mind up there among the very best of choral ensembles for Contemporary music (and you will pardon me if I capitalize music style terms. I spent too many years in the college textbook publishing world I guess. It is pedagogical more than punctuative-ly sound). If there is a brand new acapella work to be had, one feels confident that The Crossing will do it justice.

I must say that both works seem ideally suited to these sweet voices, as much as anything could be suited to anybody. Minakakis' five-part work trades in ancient Greek mythological terms with a musical score that is freshly and vividly situated in a sort of ancient ritualistic-in-Contemporary-Modern harmonically spicy-tangy palette extraordinaire. The close intervallic soundings are so nicely visceral that they neary take on some ambrosian chant from heavenly outer space aura. And the more wide-voiced soundings contrast and give outside musical air to it all. It is music so well conceived and brilliantly performed that it almost transcends on close listen what one might expect to experience.

Gregory W. Brown's "un/bodying/s" addresses water as a transformative thing for human culture and life itself, drawing on the creation of the Quabbin Reservoir in Western Massachusetts, 1936-46, and the after-consideration of water as an even wider metaphor. He draws on old and even archaic styles in his re-formation of collective voices as collective human being. The shape-note, archaic carol  singing reference is an attention getting moment, yet the whole work it its five parts gives out with ancient echoes within an ultra-beautiful Modernist expression.

The stunning quality of the choral renditions is such that one feels transported to a super-human realm where the voices sing to us of the metamorphic beauty of being human. Or that is how I hear it all as I listen with increasing appreciation each time out.

I can say that this album stands out for the exceptional artistry of the Crossing and the subtly full and original compositional stances of Maestros Minakakis and Brown.

Anyone who loves the collective choral potential of human voices and wants to know what new music has been made available for them would do very well to get this album, the sooner the better. It is a blockbuster, there is no doubt in my mind.