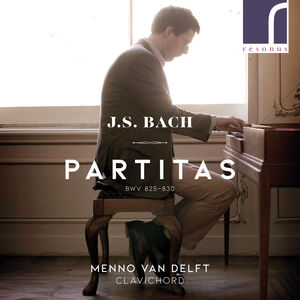 There is much I could say about Johann Sebastian Bach's Partitas in general and this new recording for harpsichord as recorded by Menno van Delft (resonus 10212, 2-CD set). I will say I hope enough to give you the idea of what you would get with this one.

It is music as worthy of our attention as anything that exists. It is superlative music in every way, and occupies a kind of special place even among Bach keyboard works for the wealth of invention and melodic thrust, and a somewhat less contrapuntal approach at times. It is series of works that sound equally well on piano as harpsichord. Over the years I have been taken by a couple of piano performances of the Partitas, namely a very obscure mono Remington recording by Jorge Demus and a much more well-known Columbia 2-LP offering by Glenn Gould. Each give us a great deal to appreciate in how a pianist might approach the music, but then there have been harpsichord versions of course and I have revelled in many of them as well.

The new Menno van Delft harpsichord performances rank up there among my absolute favorites. There are a number of reasons. The CDs were recorded among the Cobbe Collection of early keyboards in Hatchlands Park, England, and there is a spacious, resonous headroom in the stereo audio-imaging that allows the harpsichord sound to breathe quite nicely. Second, the instrument is a 1784 Christian-Gotthelf Hoffman model, of which only two survive. It sounds truly grand, quil-like in the best sense with a lower registered that stands out remarkably for its tone color.

Add to this the considerable prowess and intimate understanding Menno van Delft gives to this music. His performances are spirited, inspired and very bravura. The Partitas have some much varied charm and brilliance and Van Delft rises to the occasion with a well-ornamented reading as exciting as it is period-worthy.There is a bit of rubato as appropriate but not a great deal.

In short this is a rather triumphal recording of music ever triumphal. It is a cornerstone of Bach's astonishing inventiveness that all should hear in depth. And although there are other recordings to rival this one, I can think of no better way to hear the music than on this Van Delft offering.
Posted by Grego Applegate Edwards at 6:32 AM