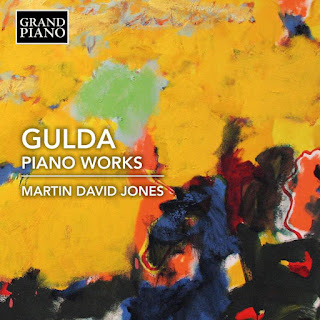 For those who have over the years been interested in the nexus between Modern Jazz and Modern Classical, the mere existence of a Friedrich Gulda (1930-2000) volume of Piano Works (Grand Piano GP759) is reason enough to sit up and take notice. That is if you know of the place Gulda has occupied throughout his life as a classical pianist of international stature as well as a jazz artist of definite talent and great merit. Most importantly I at least have been aware of his might we still say "Third Stream" compositional ventures and have followed as best I could what I managed to find in the ever-ongoing search for syntheses and pathways forward.

It may or may not be a coincidence that the compositional period represented by these works spans a time between 1965 and 1974, which was a very creative whileCfor a certain ongoing adventurism on the musical scene. Cool Jazz was pretty much a dead issue by then, whereas there were significant forays into Third Stream ventures prior to this by Jimmy Giufre, John Lewis, William O. Smith and others more or less one way or another lumped into the cool bin at some point. From 1965 to 1974 these was room for others to step in and indeed Heinrich Stadler and Friedrich Gulda and a few other Europeans along with some notable American voices did interesting compositional work. And I must stop a moment and say something about the AACM during this period. They may well be the more important of all the "serious" jazz composer-performers with some claims to "Classical" "crossover" status during that period. This is not the place to discuss that however.

It is not my intention to give some comprehensive overview of the rise and fall of the Third Stream  by say 1975, for that another time. A light sketch here is all I might want to do to set up this recording. So the CD is upon us.

I will say right off the bat that none of this music on this album has been or will be destined to move mountains in a stylistic or cutting-edge sense. The works have much room for improvisation and reflected the sort of Post-Bop musical world in which Gulda dwelled with his Jazz persona. The music has something of an eclectic quality to it. We have takes on a Boogie-Woogie/Classical nexis, then variations on the Doors' iconic "Light My Fire" (that very much strikes me as worthwhile), the multiple Jazz stylings of the ten-part "Play Piano Play," And more besides.

Anyone familiar with the Gulda presence in earlier days will find this volume captivating and reaffirming. Those coming to his music for the first time will be no doubt pleased with what they hear so long as they do not expect from it some world changing paradigmaticism!

Martin David Jones handles performance duties with sympathy, charm and a musicality that is heartening. If perhaps he is not especially by way of the evidence here a world-class improvisor it nonetheless shows you perhaps the sort of pianist who might well be attracted to the music. The improvisations set off the music well and perhaps not as much the other way around. Yet after a thorough immersing in this program I must say my appreciation of Gulda the rather brave straddler of Jazz and Classical camps comes to life once again to my pleasure. I am glad to have it!

If Gulda never wound up being a Duke or a Monk, how many do? For that we have Duke and Monk. That takes nothing away from the enjoyment of hearing this music.